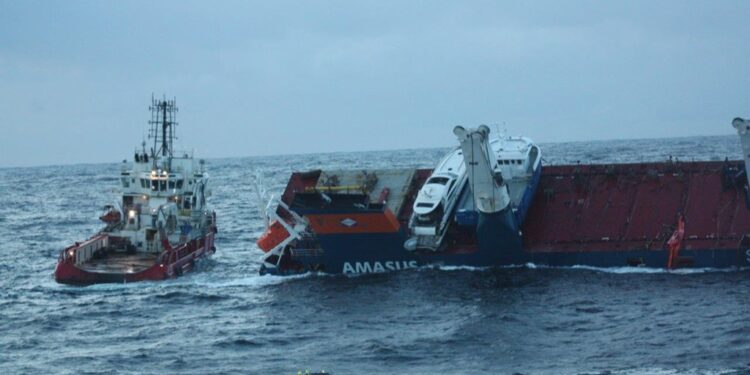 The four-day effort to secure the abandoned Dutch heavy-lift vessel that was drifting towards the Norwegian coast came to an end on April 7.

More specifically, the vessel was brought safely to port, after an emergency effort secured a towline after airlifting the salvage crew to the deck of the listing vessel.

The tow started shortly before midnight on April 7 and the vessel was alongside in the port on Flatholmen in Alesund, Norway by 5:00 p.m. local time on April 8.

The tow proceeded without incident at approximately 3 knots, while weather conditions in the area also improved as the storm subsided.

The incident took place on April 5 when the cargo aboard the Eemslift Hendrika shifted during a winter storm off the west coast of Norway.

Worrying that the ship could capsize, the captain called for assistance and the Norwegian authorities airlifted most of the crew to shore.

Later, the captain and the rest of the crew, abandoned the ship after it lost power and the storm continued to increase the risk.

The Eemslift Hendrika lost at least one of the vessels it was transporting in the storm, which the Norwegian authorities later located a few nautical miles away.

An inspection and investigation into the incident will soon begin.