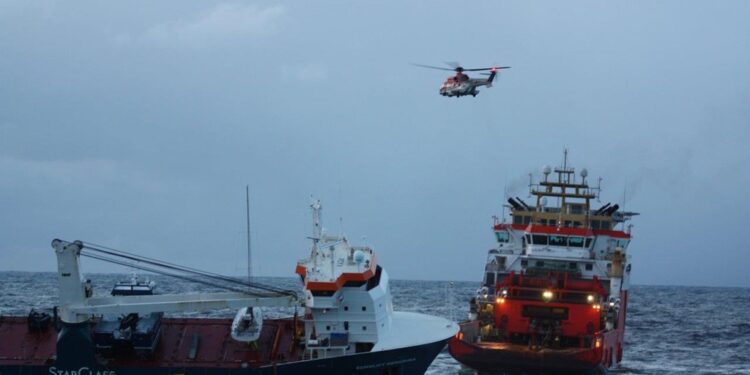 After a successful operation the vessel Eemslift Hendrika is now being towed to the port of Ålesund / Credit: NCA / KV Bergen

The Dutch cargo ship was abandoned by its crew off Norway, after suffering a severe list due to cargo shift in heavy weather conditions, last Monday.

Since then and despite salvage efforts, the Eemslift Hendrika had been adrift, causing fears it could spill some or all of the 350 tonnes of heavy oil and 50 tonnes of diesel in its tanks.

However, on Wednesday evening, the Norwegian Coastal Administration (NCA) informed of a successful salvage operation, as they managed to place crew from the Dutch salvage company Smit Salvage, plus a rescuer from the helicopter, onboard the Eemslift Hendrika, who connected the vessel to two tugboats – both at the bow and stern of the ship.

The risk of grounding has been avoided, and the ship will be towed to Ålesund via Breisundet,

…the NCA said in a statement.

The Hendrika would likely have made landfall during the night if the salvage operation had failed, risking a spill, the NCA added.

Built in 2015 and registered in the Netherlands, the 111.6-metre Eemslift Hendrika is a yacht transport vessel, carrying smaller boats on its deck.