Guidelines for safe carriage of divinylbenzene in containers

CINS (the Cargo Incident Notification System), the International Group of P&I Clubs and the TT Club have published industry Guidelines for the carriage of Divinylbenzene (DVB) in containers.

DVB is a chemical prone to polymerization (a form of self-reaction). When shipped in bulk, DVB polymerization can lead heat and flammable gas to be generated. Thus, the stowage of containers carrying DVB aboard vessels can present a risk of explosion and fire, if they are not properly presented for carriage.

As a series of polymerization incidents took place from the carriage of DVB by sea in 2018, the IMO approved changes to the way that polymerizing substances, like DVB, are carried, by amending the IMDG Code. These changes are included  in amendment 39-18 of the IMDG Code, which will be mandatory from 1 January 2020, but may be applied voluntarily from 1 January 2019.

To ensure the safe carriage of DVB in containers before 1 January 2020, these guidelines highlight the practices set out in the IMDG Code amendments. They also recommend that these must be followed now, on a voluntary basis.

The IMDG Code mandates that any polymerizing substances shipped in bulk in tank containers must be sufficiently stabilized to avoid polymerization from taking place at bulk mean temperatures of 45ºC, with temperature control needed if this cannot be done using a chemical inhibitor alone.

Polymerizing substances carried under UN 3534, using drums packed in a refrigerated container or a refrigerated tank container, generally use chemical inhibitors and temperature control to make sure they are sufficiently stabilised.

To identify whether DVB can be transported with safety without any temperature control, Special Provision 386 of the IMDG Code, chapter 3.3, requires that a risk assessment must be conducted to determine if the level of stabilization is enough to prevent the substance from dangerous polymerization.

The factors that have to be considered by the shipper or person offering the goods for transport include, but are not limited to, the following:

According to the guidelines, the transport of DVB without any temperature control generally relies on the DVB being at a low enough temperature when shipped, and the total journey time to the receiver being short enough, for the chemical inhibitor to still be effective throughout the entire journey.

In addition, the chemical inhibitors most commonly used to prevent DVB polymerization require oxygen in order to work, and also break down and become ineffective, in case the DVB is exposed to temperatures above about 27º C.

Finally, under the changes in amendment 39-18 of the IMDG Code, chapter 7.3.7, the only method of temperature controlled allowed for shipments of polymerizing substances, except from shipments on short international voyages, is the use of refrigerated equipment, regardless of the type of container used. 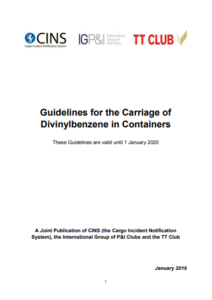