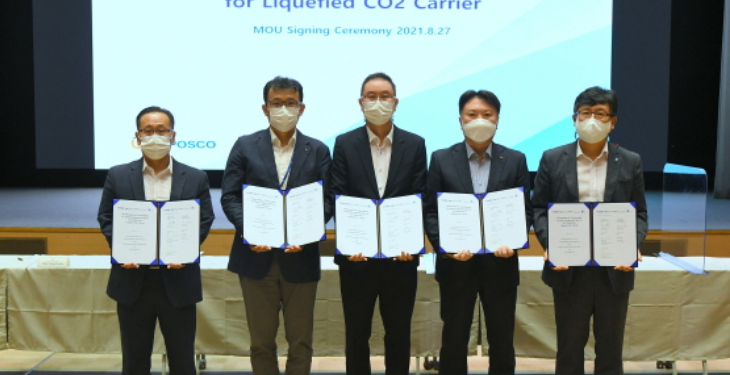 Posco is collaborating with Hyundai Mipo Dockyard in order to develop liquefied carbon dioxide carrier and gain an upper hand in the carbon capture, utilization and storage market.

Posco said it has agreed to build the liquefied CO2 carrier, as the demand for such ships is expected to grow amid the global movement for carbon neutrality and the transition to hydrogen energy.

For the records, Korea Shipbuilding & Offshore Engineering, Lloyd’s Register and Liberian International Ship and Corporate Registry are also participating in the project.

Namely, on 27th August, the executives of the five companies signed the memorandum of understanding which agrees on building the LCO2 carrier that is 20,000 cubic meters in capacity, and developing related technologies.

“Posco is cooperating with its clients and other companies to build the world’s first large LCO2 carrier, and gain an upperhand in the global market for carbon neutrality,” a Posco official said.

Under the agreement, Posco will be in charge of producing the steel needed to build the LCO2 carrier, which will be able to withstand low temperatures and high pressure.

Concluding, HMD and KSOE will design the ship, and LR and LISCR will certify and register the vessel, so that the envisioned carrier receives the necessary international certification by 2025.