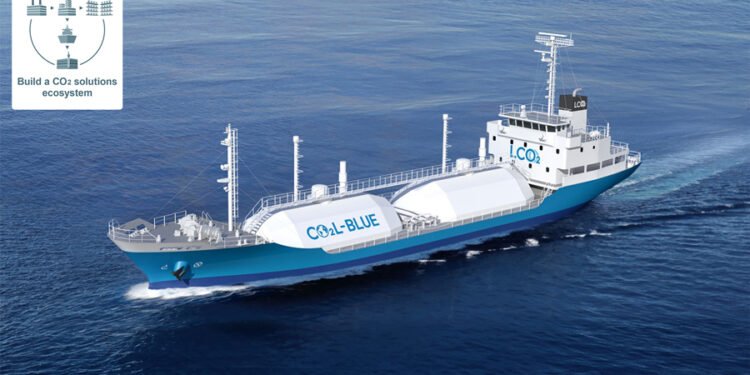 Mitsubishi Shipbuilding has concluded a contract with Sanyu Kisen for the construction of a demonstration test ship to transport liquefied carbon dioxide (LCO2).

Construction will start at the Enoura Plant of MHI’s Shimonoseki Shipyard & Machinery Works, with completion and delivery scheduled for the second half of the fiscal 2023.

The Engineering Advancement Association of Japan (ENAA) will charter the ship from Sanyu Kisen and operate it for the project purposes.

Under consignment from ENAA, three additional project partners – K LINE), Nippon Gas Line, and Ochanomizu University – will accelerate R&D of the LCO2 transportation technology and contribute to cost reduction of CCUS technology and safe, long-distance and large-scale transportation of LCO2.

Although ships to carry LCO2 used in the food industry have previously been constructed and operated in Europe and Japan, the ship to be newly constructed is expected to be the world’s first LCO2 carrier intended specifically for CCUS.

CCUS is garnering attention today as an effective means of achieving a carbon-neutral society. Because CO2 emissions sites are often located distant from the sites selected for carbon utilization or storage, demand is expected to increase for LCO2 carriers which can transport their cargo safely and economically

The ongoing development of LCO2 carriers and active quest for commercial viability in this area are part of those initiatives, with the company’s ultimate goal set on realizing decarbonization as a marine system integrator.

This new organization will use the advanced technologies accumulated by the company in order to accelerate technological development and new business creation in the marine decarbonization field, as well as respond to global trends and market needs to realize a carbon neutral world.