Compliant recycling of a navy tanker

Mr. Henning Gramann, CEO at GSR Services, talks about an interesting project in which his team was involved with the aim to change the image of beaching in India substantially. In particular, Mr Gramann describes the process, from the beginning till the end, toward responsible ship recycling of the HMNZS Endeavour in Alang shipyard in compliance with Hong Kong Convention, EU-Ship Recycling Regulation and Basel Convention. As explained, proper planning and assistance by experts to develop all necessary documents (such as IHM Part I and II) are of outmost importance for conducting responsible recycling.

After 30 years of service the single-hulled tanker HMNZS Endeavour was no longer IMO-compliant anymore and the New Zealand Defence Force (NZDF) needed a disposal plan. Various options were investigated, but selling as an ongoing concern or sinking as a diving attraction were not feasible making responsible recycling the only practical option left.

NZDF started disposal planning in 2016 initially with an offer from an Australian ship recycling facility that required a substantial payment for dismantling of the vessel. Further research led to an offer of 100.000 USD from a major cash buyer for recycling and however, through attendance at the 2017 Ship Recycling Congress the NZDF made contact with GSR Services to assist in approaching the wider recycling market and supporting a compliant recycling programme. Economics played a very minor role for NZDF planning but notwithstanding it was still considered that a sound financial outcome could also be achieved.

The goal was simple - to achieve sustainable and environmentally compliant recycling. A Compliance Concept for evaluation of best practice, legal compliance and requirements for all stakeholders involved was prepared by GSR. Considered were Hong Kong Convention for Safe and Environmentally Sound Recycling of Ships (HKC), the Basel Convention on Transboundary Movement of Hazardous Wastes (BC) and past experiences gathered. HKC including related guidelines for technical and organizational aspects of the practical work while the BC was required by NZ for notification and prior written consent procedure. Based on these specific technical and organizational evaluation criteria for the Tender, selection and contracting processes were developed.

GSR Services developed the ship specific Inventory of Hazardous Materials (IHM, Part I) and assisted the NZDF in providing the required IHM Part II (hazardous wastes) and Part III (hazardous materials in stores). All documents were provided to Tender participants.

Participation was restricted to HKC-certified ship recycling facilities only who had to provide their certified Ship Recycling Facility Plan (SRFP), Ship Recycling Plan and agree to a number of additional requirements including strict monitoring and control scheme throughout the entire recycling process. Even though the Tender was advertised globally, only eleven recyclers from India actually participated.

Based on the developed criteria four ship recyclers were shortlisted. On-site audits were carried out by a team from the NZDF guided by GSR Services and its local partner GSR Sentinels. After a detailed evaluation of the shortlisted yards and final selection, the sale contract was signed on 12 January 2018 between the NZDF and Ace Ship Recycling from Singapore who represented the chosen ship recycling company JRD Industries.

NZDF was highly selective throughout the entire process and specific performance aspects were contained in the sales contract including a substantial bond to ensure compliance. Additionally JRD Industries as a good will offer offered to refurbish and donate furniture and fittings from the ship to Alang community agencies including the local school, medical facility and health clinic.

All parties then cooperated in obtaining the required information and certifications required under BC for evaluation by Environmental Protection Agency (NZ-EPA) of New Zealand. The prior written consent procedure under BC was then started by NZ-EPA in co-ordination with Indian Authorities. Approval was subsequently granted for the export of Endeavour to India with conditions that no crossing of other national territories was permitted for the final voyage, full tracking of all materials leaving the yard, reporting to NZ-EPA about the recycling processes and waste disposal and an obligation to return the ship back to New Zealand in case it was rejected by India. It is believed that ex- HMNZS Endeavour is the first ship to be imported and recycled in full compliance with BC procedures in India. 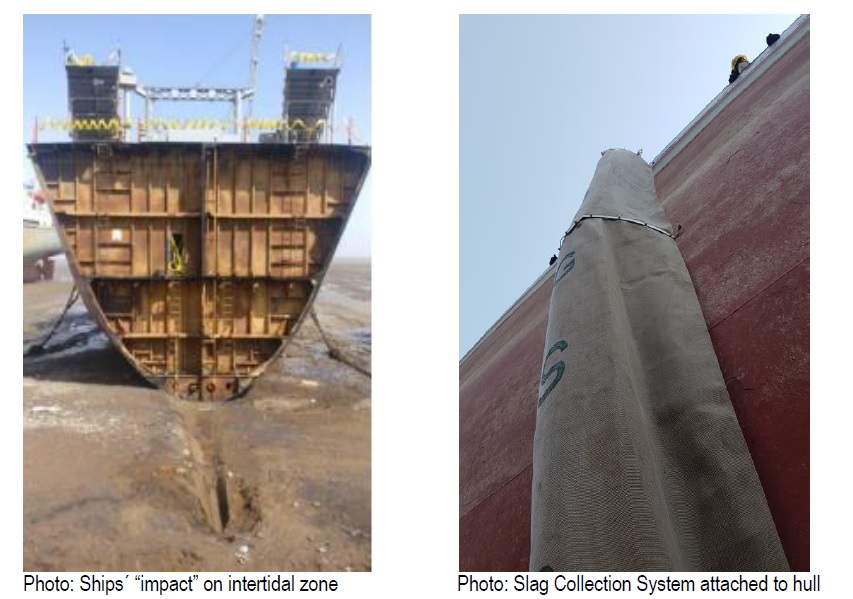 After familiarization of buyers´ crew with the ship, HMNZS Endeavour was handed over at the NZDF Devonport Naval Base in Auckland, New Zealand and departed on March 24th, 2018. The buyer was required to change the flag of the ship due to requirements of the insurer for the last voyage and re-name it to MT Endeavour as it was no longer a Royal New Zealand Navy Vessel. Notwithstanding the change of ownership and flag the NZ Government still tracked MT Endeavour all the way the agreed destination and supervised its landing at JRD Industries in Alang as a condition of the sale.

The entire recycling was supervised by GSR Services from Germany and GSR Sentinels from India with additional time lapse recordings of the process arranged at the request of the NZDF. All aspects of HKC, BC, compliance concept, ship recycling plan, ship recycling facility plan, and the additionally agreed conditions were within the scope. NZDF also routinely visited JRD Industries during the recycling process until its conclusion on July 25th 2018 and conducted a formal audit of the outcomes. It was pleasing that through JRD’s safety system and management no accidents occurred during the process and short halting of recycling was only ordered twice due to minor safety issues.

Additionally a new system for catching falling slag and paint chips during primary cutting in the inter tidal zone was tested and a time lapse camera has recorded the recycling process.

It has to be recognized that the ship recycling industry in India delivers huge quantities of ships materials for reuse and recycling to a network of traders. They employ thousands of workers and it is a billion dollar business that effective material reuse and recycling. The hinterland markets can be distinguished into the following categories where the various items coming from the ships are sold to:

The direct reuse of steel saved 1.15 million KWhs of electricity compared to re-smelting in arc furnaces, 250.000 m3 of CO2 emission and 1.000 tons of waste avoided compared to other recycling destinations which have a much lower reuse and recycling ratio.

All parties involved have concluded that responsible ship recycling and Basel compliance is achievable with a bit of extra effort, and it is more sustainable in India than in other regions. Additionally it comes at a very low cost, it´s just a matter of the experts involved.