The case of ammonia as a marine fuel

by Kokarakis John
in Fuels, Opinions

During the 2020 SAFETY4SEA Limassol Forum, Dr. John Kokarakis, Vice President Technology & Business Development, Bureau Veritas, discussed ammonia as a potential solution for carbon-free shipping. During his presentation, Dr. Kokarakis presented the advantages of ammonia on the one hand, and the challenges on the other, adding that difficulties around ammonia can be controlled by technical and regulatory options.

The hot question of today is if the ammonia is a feasible solution for carbon-free shipping economy. Of course, it is well known that ammonia is part of the solution to the problem, it is not the unique solution, there will be a combination of solutions.

The prediction for 2050 is that the split between carbon-free and non-carbo containing fuels will be about 50-50, meaning that one of the carbon fuels may be ammonia.

Among the properties of the liquid ammonia is its energy density of about 18.6 MJ/kg. It is significantly lower than today’s marine fuels as well as natural gas and LPG. So ammonia has relatively low energy density. The big advantage of ammonia is that it can be stored in higher temperatures in a liquid form under atmospheric pressure. It is a mildly cryogenic liquid.  Under atmospheric pressure, we need –33,4 degrees. At ambient temperatures of 20 degrees, we need about 10-bar pressure. The pressure  versus boiling temperature of ammonia can be seen at the graph here below. 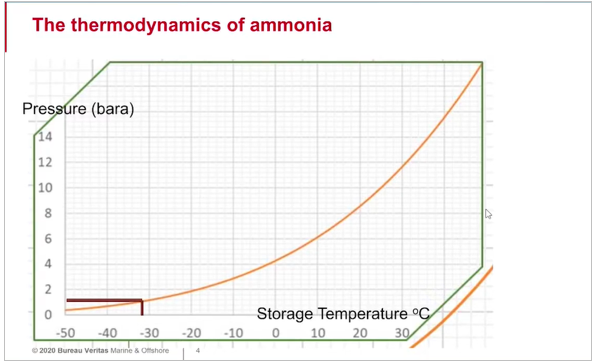 The flammability of ammonia is relatively limited, as it is limited in a specific range between 15-25% LEL and UEL. This is a blessing and a problem at the same time. A blessing because it is more difficult to ignite it, and problem because we need to enhance its ignition capability via pilot fuels. 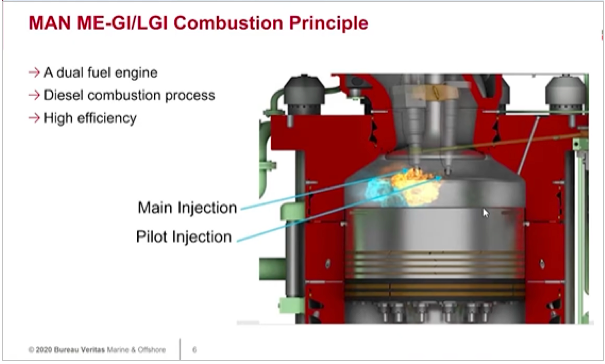 In the above figure, you can see a cross-section of a MAN LGI, liquid gas injection engine, which burns LPG and is promulgated to burn ammonia in the future. You can see the main fuel, as well as the pilot injection. The cylinder head of the ammonia engine looks like in the figure below, with the injection and pilot fuel valves, with a hydraulic accumulator to tackle the pressure transient situations and hydraulic and sealing oil connections. We have a double-wall gas piping for safety reasons, both inlet and return lines. 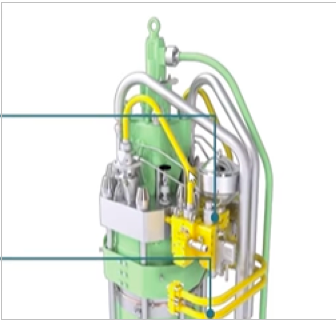 The advantage of ammonia used as fuel is that it contains no carbon but it needs pilot fuel for combustion. The pilot fuel proportion may be as high as 20%. Ammonia is the highest carrier of hydrogen, which has a significant energy density in contrast. Given the limited flammability of ammonia, we need pilot fuel for its combustion.

Also, it has to be produced by renewable energy, otherwise,  a lot of energy is required. It is the well known Haber-Bosch process. Ammonia can be stored at ambient temperatures as a liquid at moderate pressure below 10 bar. It has low flammability with LEL= 15% and UEL= 25%. It is mildly cryogenic. It can be stored at atmospheric pressure at –33 degrees C.

MAN is looking to burn ammonia in their LGI engines. They have burned LPG  and they currently plan to have an evolution of that engine with ammonia as a fuel. The storage tank is placed on deck with the fuel preparation room placed in front of the storage tank. The system is completed by the knock out drums, which hold the liquid residues from the fuel, the fuel supply system and a nitrogen purging system to make sure that we have in case of emergency, an ammonia-free piping. 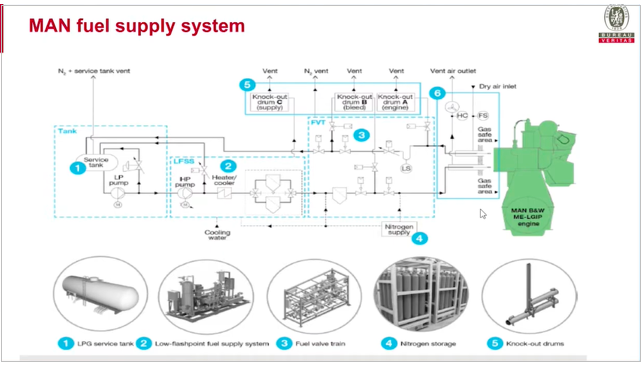 The fuel supply system for ammonia is designed by MAN. Ammonia is moved from the storage tank via low-pressure pumps, then the pressure is increased to about 70 bar via high-pressure pumps. Ammonia is then filtered and goes to the engine utilizing double-wall piping for safety and returns also in double-wall piping, passing through the knock out drums, prior to a potential venting.

The system can be isolated and shut down and also shift to the liquid mode in case of an emergency.

Because we are dealing with ammonia, which is a noxious compound, we need to have a Selective Catalytic Reactor, SCR, according to MARPOL ANNEX VI, meaning that we will need to have urea in storage. Urea decomposes the NOx compounds into harmless nitrogen and water. This, unfortunately, induces more  CAPEX  in the ammonia installation.

NOx in the exhaust gas is in the form of nitric oxide (NO) and nitrogen oxide (NO2) usually in proportions of 95% and 5% respectively.

Nitric oxide is not considered hazardous to health at typical ambient concentrations. The tendency of NOx to get oxidized to harmful N2O attracts our attention. N2O is also known as the laughing gas and unfortunately is a very potent GHG.

NO2 concentrations are low. The level sometimes is increased on purpose to enhance NOx conversion at low temperatures. In the case of increase nitric dioxide, N2O formation is also possible. It is estimated that it is 300 times worse than carbon dioxide regarding global warming potential.

Furthermore, given the low energy density of ammonia, we need much more storage volume for ammonia. It has been estimated that for a very large crude oil carrier, we need 3 cylindrical tanks, each one 10 meters diameter and about 50 m length for a range of 7,500 nm. This is quite a high demand in footprint for the deck of the vessel. One solution will be to mix ammonia with hydrogen, which has higher energy density and that way increase the energy content of the fuel.

Although ammonia is not that much flammable, it is highly toxic and corrosive. However, the fertilizer industry has more than 100 years of experience working with ammonia, without major accidents.

Ammonia, when mixed with water, is highly corrosive, as it mixes with body fluids, like sweat, causing skin burns. Ammonia is lighter than air, but if it is in solution with water it becomes heavier than air and then becomes a health risk.

Ammonia also corrodes copper, brass and zinc alloys. The storage tanks for ammonia, need to have various safety features like vents, relief valves etc. Of course, we need to be careful where we vent. Vent discharges have to be designated as dangerous areas because of the toxicity of ammonia.

Safety tips for ammonia as a fuel

Overall, ammonia can be a viable alternative future but still has many challenging areas that we may solve them with appropriate research in due course.

Above text is an edited version of Dr. John Kokarakis’  presentation during the 2020 SAFETY4SEA Limassol Forum.

You may view his video presentation here below

Dr Kokarakis a 1979 graduate of National Technical University of Athens, holds PhD (1986) and Masters degrees in Naval Architecture (1983) and Mechanical Engineering (1984) from the University of Michigan. He worked for over ten years as a consultant undertaking technical problems worldwide. His specialization was in the area of technical investigation of marine accidents. In his capacity as a forensic engineer he participated in the technical investigation of the Exxon Valdez grounding, the Space Shuttle Challenger disaster, the drillship Sea-Crest capsize, the Piper Alpha fire and explosion, the Aleutian Enterprise foundering in Alaska as well as many other accidents of less notoriety. In addition, he was a technical consultant for SEALAND, APL, MATSON Navigation, Chevron and other companies. The last twenty years he works in Greece, in the area of classification. Having served in the plan approval office of American Bureau of Shipping in Piraeus, he then joined Germanischer Lloyd heading their tanker and bulk carrier team in Greece. He is currently the Technical Director of Bureau Veritas in the Hellenic and Black Sea & Adriatic Zone. In his duties Dr. Kokarakis is responsible for the smooth technical operation in the Zone as well as in the harmonic cooperation with the BV offices worldwide to the benefit of the BV clients. He is a member of SNAME since 1976 and a Fellow of the Society. He is currently the Chairman of the Greek Section since 2014. He has also served as International Vice President of the Society and a Member of the Fellows Committee.