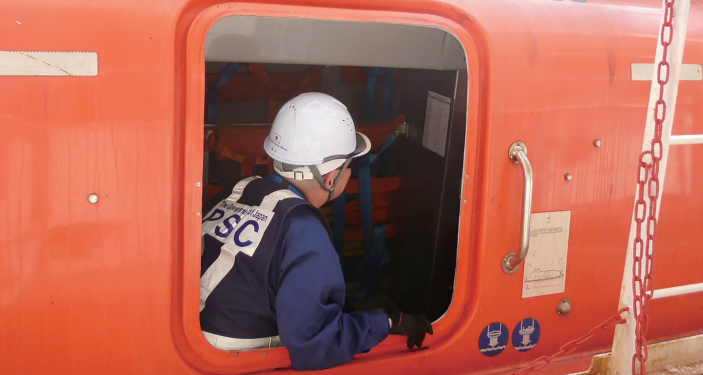 Besides the focused Concentrated Inspection Campaign on Emergency Systems, in general, the Port State Control Authorities are focusing on the procedures and equipment related to emergency systems during PSC inspections.

In particular, in all PSC regimes, an inspector checks the following issues which are considered to be important for the safety of the ship:

Additionally, one or more drills are checked in order verify the readiness in crew’s response, as indicated below

Taking into consideration PSC results of the last five years (2016-2020), the Deficiency Category under ‘Emergency Systems’ title is amongst the top 10 (Table 1) and accordingly, the share of Emergency Systems in detainable deficiency codes is significant (Table 2)

According to data, the most common deficiency in the category Emergency Systems globally, during the last 5 years under review, is the 04103 – Emergency Lighting, batteries, and switches. This is also the most common deficiency code in almost all PSC regimes (Expect Vina del mar and AMSA). In essence, this is considered as a common item to be checked by a PSCO; emergency lighting installations and batteries are checked in depth during PSC inspections.

Given that many of the emergency installations are on open deck, these are subject to maintenance failures and malfunctions. Additionally, emergency lighting in accordance to SOLAS should be tested during every drill. Thus, when a PSCO requires the execution of a drill, the related emergency lighting conditions should be check simultaneously.

The most common findings for Emergency Lighting during inspections are:

On the other hand the most common detainable deficiency Emergency Systems’ deficiency code globally is 04114 – Emergency generator. The same stands for almost all PSC regimes (expect for Paris, Black Sea and Indian Ocean MoU). Emergency source of power is considered as an important issue for enhanced safety on board. In fact, SOLAS has a dedicated section in Chapter II, regarding emergency source of power. Therefore, it is important for ship operators to take into consideration that during inspections, PSCOs may ask the crew to activate emergency generator, emergency fire pump and emergency steering gear installation.

The most common remarks for Emergency Generators are:

Another equipment- related important item and a common detainable deficiency is code 04102 – Emergency fire pump and its pipes. In this context, PSCOs often require one fire hose to be placed into forecastle and one into bridge wings and require the crew to activate emergency fire pump and provide sufficient water in the two hoses.

Most common remarks regarding Emergency Fire Pump on board are:

Apart from the emergency equipment procedural, related items are checked during PSC inspections. As shown on Table 2, in Paris MoU the most common detainable deficiency code for Emergency systems is 04019 – Fire drills. The other PSC related codes for drills are:

During PSC inspections, drills are also being conducted in order PSCOs to check crew performance during emergencies and their familiarity with procedures and related equipment.

Most common deficiencies remarks during inspections related to drills are:

The above are the most common Emergency Systems related findings during PSC inspections. However the rest of the codes are also important for ships safety.

Most of the aforementioned findings have to do with familiarity of the crew and functionality of systems. In that regard, a good preparation before PSC inspections is required for all crew members and the Managing Company plays a key role towards. It is advisable a detailed checklist with all items to be prepared and additionally, internal training during on board drills (prior a PSC inspection or a real emergency) to be conducted as it is vital for ships and personnel safety.