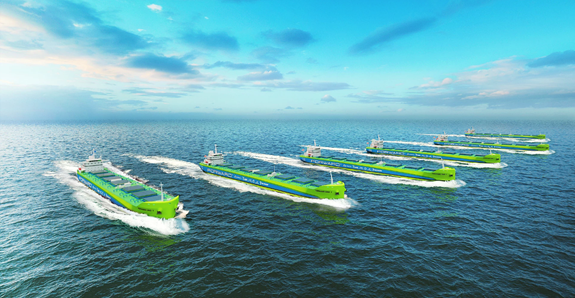 LNG as a Fuel: Key considerations

During the 2019 Hellenic American Maritime Forum, Mr. Antonis Trakakis, Chief Technology Officer, FORWARD SHIPS, talked about LNG as a fuel. Namely, Mr. Trakakis stated that LNG provides the safest path towards a carbonless future, and there is no reason for the delay of its uptake.

Nowadays, shipping has to adapt in a changing world and comply with continuously increasing  pressure for reducing the GHG emissions by implementing EEDI & IMO’s ambitious targets and strategies to meet the Paris Agreement. EEDI regards new-building ships  and is not very difficult to meet, except for bulk carriers, where only 1% of ships of current design meet the phase III. For the Paris Agreement, which involves all ships, the difficulty is that apart from the need to carry more goods, the shipping industry has not only to reduce the emissions, but has to reverse the slope of emissions generation. It’s an invitation to do things differently and apparently this involves a new fuel.

Currently, hydrogen is receiving more and more attention; primarily because  its combustion does not produce CO2. But hydrogen is highly flammable and very demanding in terms of storage and handling pressure/temperature Its wide adoption is limited by mainly two factors:

Furthermore, we have to be very careful with the balance of emissions. Hydrogen is the most abundant element in the universe, but on earth does not exist as a free molecule. It has to be produced. The most common method to produce hydrogen today is the steam reform of methane. For one ton of hydrogen this method will produce ten tonnes of CO2. If for the same amount of energy delivered we have to burn methane, then only 6,8 tonnes will be produced. Therefore, the emission balance does not work in favor for the production of hydrogen if we wish to establish hydrogen alone as a new fuel.

Batteries are also becoming very favorable because their cost drops continuously. But, even in best case scenario, , they will always be very expensive. For the concept to run well the energy stored should be enough to take the ship from one port to another without the need of intermediate charging. And even better, when the ports are very close to renewable energy sources. It makes no sense if in the middle of the ocean, we have to run engines to charge the batteries.

Consequently, batteries are good for coastal trades and for vessels with specific and particular demand like load transients as is the case for platform supply vessels.

In our strive to reduce the CO2, there are apparently two ways:

Apparently we need to rely on both options, the former in the immediate present and the latter as we are going more to the future. And for long term solution, we definitely need a non fossil fuel.

Apart from the benefit of non CO2 emissions, hydrogen also yields much more energy per ton than carbon. Therefore seeking for a new fuel, we would need to have the highest H/C ratio. The use of renewable energy is like introducing a carbonless fuel or a fuel with infinite hydrogen to carbo ratio. But then, If we want to rely on the renewable energy sources for a significant impact on GHG emissions, the intermittent nature of this energy together with the continuously changing demand of the consumers, requests a viable storage method.

A very good storage of this surplus of energy is the carbon neutral fuel, which is synthesized with CO2 which is recycled from the atmosphere together with hydrogen which is produced with electrolysis from renewable energy sources.

Therefore, we actually substitute the fossil carbon of the fuel with carbon from atmospherically recycled CO2. The combustion of this fuel would result in zero net increase in the atmospheric CO2 concentration. And hydrogen is used in the fuel rather than as the fuel.

Which hydrocarbons are very attractive?

The best one is methanol. Due to its hydrogen to carbon ratio of 4:1, it  is the simplest organic hydrogen carrier which under normal conditions Is in liquid state. But methanol has many problems. It is corrosive, it has a similar price to fuel, it has very low energy content, which means double fuel consumption, therefore the operating cost is very high, essentially equal to fuel and last but not least, it is a low flash point fuel with the necessary complications.

Methane from carbon capture, also with H/C = 4:1 is the only fuel that can really address the issue of how to store this surplus energy, because the produced methane in this form can be ejected in the gas grid of the existing infrastructure which serves as a buffer with practically no limitations in storage volume and time. 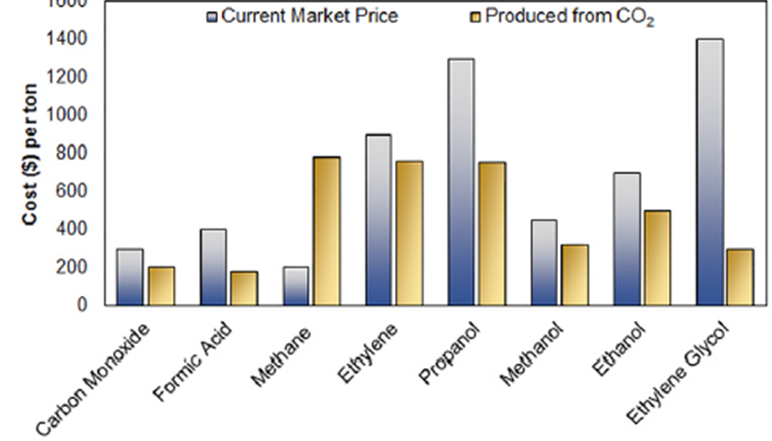 On this graph we can see that the cost for one metric tonne of carbon neutral methane is 800 dollars.

Having made our model test for the ship design that we have developed in Project Forward, we are able to confirm that, first of all, with LNG as fuel we easily meet the EEDI phase III. We also did a study to see how we can meet the IMO’s future requirements. The target of 2030 can be easily met with a very small drop in operating speed. Going to 2050, the speed has to be reduced significantly , and yet to  value which practically disrupts the commerce, or with adopting a fuel blend of carbon neutral methane and % fossil LNG.

Depending on the % of fuel mix, a speed reduction might be necessary as well, but in case we use 55% carbon neutral methane there is no need to reduce speed at all

Apart from technological studies, we also have to care of the cost effectiveness of what we suggest.

For our cost calculations we have used the above mentioned cost of the 800 USD/MT for the carbon neutral methane, we have added liquefaction and distribution cost and we have used the prices of today’s fuels available, to calculate what is the running cost with different fuels. If we add a small GHG taxation, we arrive to a very surprising conclusion, that the cost of running on 0.5%, the new compliant fuel which offers absolutely no improvement on greenhouse gas emissions is the same like the fuel which meets the IMO 2050 targets.

We see no reason on why the adoption of LNG is delayed and we see absolutely no reason to address slow steaming.

Society is constantly seeking growth and of course this has to happen in a sustainable manner, following a path that will take us to a secure future. If we want to speak what is the sustainable path of growth we may end up with endless discussions and argumentation. Our studies in  Project Forward, serve as the analysis of the potential of LNG, and we believe that due its abundance, its low price , its technological maturity, the most favorable cost in terms of USD/kJ and the lack of need of extra infrastructure, LNG is the safest & most sustainable path towards a carbon less future,

Concerning the energy production onboard, LNG comes with a unique challenge, that it can be supplied to the engine  in either low or high pressure, operation then following different heat cycles. Each of them has very distinctive pros and cons and very distinguishable characteristics. Actually, LNG is inviting us to revisit and reconsider our practices, but always maintain our key values; and for us, the most important value is reliability, which is the continuous ability to perform an assigned task.

For this, we have arrived to a different  machinery  arrangement featuring only two 4-stroke engines for production of electric and propulsion power. These engines are the Wartsila 31DF ; this engine has such sophisticated controls that succeeds very high thermal loading and a record-breaking energy efficiency.

What we can also see is that although the cornerstone value of efficiency in shipping, the specific fuel consumption is very different between 2 stroke and 4 stroke engines, our arrangement enjoys the same overall system performance and fuel bill with other 2 stroke rivals.

Coming back to sustainability, We have carried out a risk assessment to see how the proposed machinery arrangements and transfer to new fuel affects safety.

We are very happy to see that traditional risks are removed, such as:

Of course we have some extra risk, as:

The biggest problem is that new fuel and engine technologies, introduce new challenges for the crew on board, regarding their qualifications & training.  The current circumstances where competent crew is deficient , is a very critical node for our project.

For us it is impossible to safeguard safety without the human element.  We are convinced that unmanned engine room is not a solution. And although we would like to, it’s not possible to provide the proper training to all engine crew onboard. Therefore, we decided to split the functions and tasks of crew to different sources and allocations.

For this we maintain a skeleton crew,about half of today’s standards that will do the ordinary supervision of the machinery and we allocate the control & monitoring to very few superintendents ashore which will perform a 24h a day basis monitoring of the machinery, and will advise the crew onboard of what is the necessary immediate actions, in case a problem appears. Two or three people will be needed to supervise a fleet of similar vessels. Maintenance will be done with riding crew. The most important function for the crew onboard, is to provide emergency response in case of need, where necessary by following instructions from ashore, and to succeed safe return home. In case of any major incident the crew on board can always, even by shifting operation to conventional fuel , safely sail the ship to next port. If we had to account for electronics to do this, the cost would be tremendously high.

There are many benefits from this concept, because the control & monitoring of machinery will be carried out only by specialized and very well trained people. The crew onboard will have only to focus on safety and ordinary supervision of running machinery, therefore, the stress of troubleshooting , and the chances of human error which are the biggest sources of accidents will be minimized. The crew will need less training, so all maritime academies can easily continue providing the crew for the ships. The cost will be reduced, not only because we have less crew, but because we have less crew exchange costs, less cabins and less energy consumption. And maintenance will be always done by specialized persons.

Above text is an edited version of Mr. Antonis Trakakis’s presentation during the 2019 HAMF Conference.

You may view his presentation herebelow.

Antonis Trakakis is the Chief Technology Officer at Forward Ships. He has graduated from Mechanical Engineering dept of NTUA and carried out graduate studies at von Karman Institute for Fluid Dynamics in the field of Turbomachinery. Antonis has worked with all kinds of internal combustion engines, ranging from gas turbines, to all sizes of four stroke, and two stroke engines, and one of his special concerns has been the formation and control of emissions, and engine efficiency.