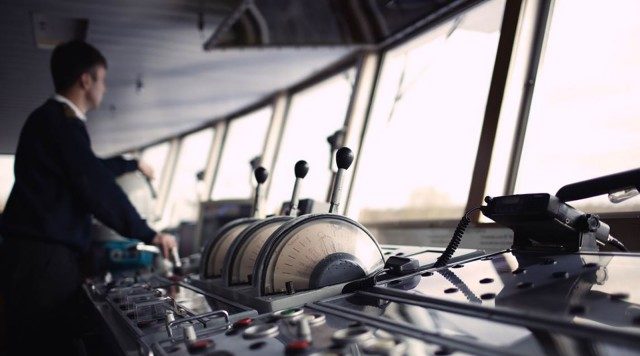 The fundamental principal in Bridge Resource Management (BRM) is that vessel navigation and operation is not one-man show. BRM makes use of all available resources onboard (equipment, information, human resource) to ensure the safe completion of vessel’s voyage. Likewise in all operating systems, the navigation and handling of vessel should be protected by a single point of failure.

The following case refers to an incident in which lack of BRM is identified as a major cause. While the consequences of lack of BRM as seen in many accident reports are indeed severe, there are many reasons that BRM is not effectively applied onboard; in this regard, one important goal is to eliminate the single point of failure.

On 31st of October 2018, a Ro-Ro passenger vessel while maneuvering in port of Barcelona collided with a shore crane, causing fire on dock as the crane collapsed. Fortunately no one was injured; the incident is currently under investigation by competent authorities.

By coincidence, few days later MAIB issued the investigation report of a container carrier which conducted a heavy contact with the quay and two shore cranes while executing a turn under pilotage during its arrival at Jebel Ali, UAE. It is not known yet what happened in Barcelona port but the two cases seem to have similarities as both collisions with shore cranes conducted during ships’ turning inside the port.

Namely, the outcome of MAIB investigation showed a list of interesting findings with respect to Bridge Resource Management. The container vessel in Jebel Ali was under pilotage. The pilot was on the bridge, with Master and the personnel assigned for duty under pilotage conditions as per Company’s SMS. Pilot maneuvered the vessel for berthing having two tugs standing by for assistance. During a maneuvering circle the vessel collided with two shore crabs causing the collapse of one.

Findings in brief showed the following:

The above case is a typical example of what is happening on board when a pilot embarks a vessel; albeit it should not be this way. Unluckily, there are Masters that without any control procedures “turn the conn” to the pilot or there are pilots that immediately after entering the wheelhouse start to give steering and engine orders without consulting the bridge personnel. Also, there are Masters that even leave bridge while the pilot is controlling the vessel. Concluding, the relation between Pilot and Master is the critical issue leading to single point failure in such cases.

However, legislation states a different basis for Master/Pilot relation. According to MAIB’s report, IMO Resolution A.960 mentions that:

2.1 The pilot’s presence on board does not relieve the master or officer in charge of the navigational watch from their duties and obligations for the safety of the ship. It is important that, upon boarding the ship and before pilotage commences, the pilot, master and other bridge personnel are aware of their respective roles in the safe passage of the ship.

2.2 The master, bridge officers and pilot share a responsibility for good communications and understanding of each other’s role for the safe conduct of the vessels in pilotage waters.

2.3 Masters and bridge officers have a duty to support the pilot and to ensure that his/her actions are monitored at all times.’

On the above, it would be necessary to add the ISM requirement for a safety management system to clearly state that the master has the overriding authority and the responsibility to make decisions with respect to safety and pollution prevention and to request the Company’s assistance as may be necessary.

Reviewing the identified causes that led to the accident, it is clear that none of the above legislative requirements was implemented successfully.

Safe navigation requires a close loop between decision and predefined procedures.  In particular, this loop has three stages prior reaching to a maneuver:

Predefined procedures include the exchange of information featuring Passage Plan analysis for responsible crew members, master/pilot exchange card and roles and responsibilities as discussed between all bridge team members (incl. the pilot). What is more, all personnel involved should be trained as required to become experienced and highly familiarized with vessel’s maneuvering and handling behavior.