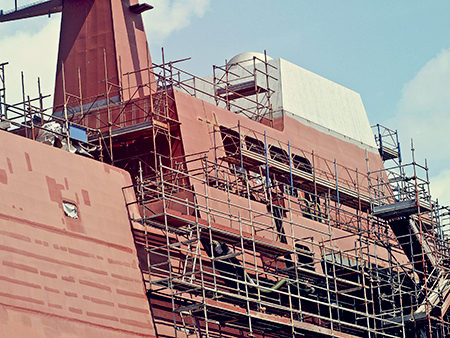 Chatsworth, US-based investment banking firm, is collaborating with Onex Elefsis Shipyards on investment of about USD 400 million in financially-distressed Elefsina Shipyards. The agreement for the partnership was decided on July 9, between the two companies. Now, Chatsworth Securities became the stakeholder of the shipyard and is also the exclusive investment bank for the company’s capital needs.

Specifically, Onex Elefsis shipyard requires the second biggest shipyard in Greece, following Greek Bankruptcy Law and rehabilitation plan that is expected to be approved by the Greek courts within 3-6 months.

Moreover, the company is under discussions with the Greek government and creditors to re-start as another company, similar to Onex Group in the case of Neorion Syros Shipyards.

According to reports, the deal will surpass the USD 400 million within the next 15 years, and is thought to be the biggest turnaround in the history of Greek shipyards.

Ralph Di Fiore, Managing Partner and one of the four founders of Chatsworth stated

This is a very important cooperation for our group. By joining Onex Elefsis Shipyards, LLC with an economic stake in the company our commitment its success is paramount.

Panos Xenokostas, Onex Shipyards Founder & CEO added that the shipyard aspires to become a global brand that will boost Greece’s reputation as a destination for shipping services.

In the early days of 2019, in attempts to improve the area, Greek authorities began to remove the ships from the Gulf of Elefsina, and the Port of Piraeus, some of which have been there for decades, saying they are both an environmental hazard and a danger to modern shipping.