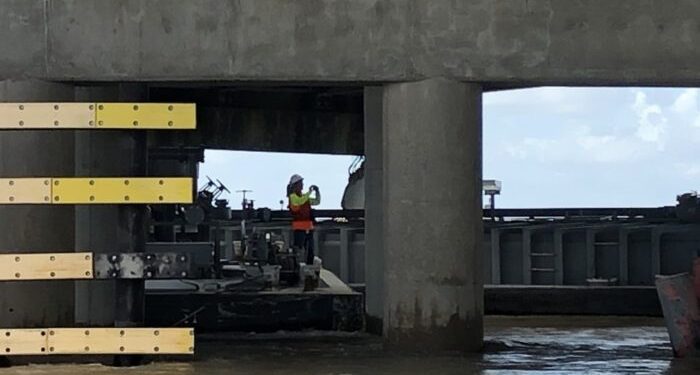 The US Coast Guard informed that it is responding after at least two barges struck the I-10 San Jacinto River Bridge near Channelview, Texas, on Friday, September 20. Namely, nine barges broke away from the moorings.

In the meantime, Sector Houston-Galveston Vessel Traffic Service had already suspended vessel movement under the I-10 bridge at 7:20 p.m. on September 19 because of strong currents.

According to sources, at least two barges hit the bridge, which sustained significant damage to its concrete pilings.

As vessel movement is sustained, detours make drivers head north to Highway 90, which crosses the San Jacinto near the town of Barrett, or the Fred Hartman Bridge over the Houston Ship Channel.

What is more, I-10 is also shut between Beaumont and Winnie, Texas, because of high floodwaters.

In addition, as of Friday six barges have been retrieved in order to be transported to fleeting areas, including four with soybean oil, one with caustic soda and one with lube oil.

Moreover, two barges remain lodged under the bridge, one containing naptha and the other ethylene glycol.

The rest of the barge is beached to the north of the bridge, containing lube oil.