Singapore Strait: Scrap metal theft from barges on the rise

The continued occurrence of incidents in the Singapore Strait was significantly highlighted in ReCAAP ISC monthly piracy report in July, as well as ReCAAP ISC half yearly report.

Although all the 14 incidents were CAT 4 (petty theft) in nature, as the perpetrators were not armed and the crew not harmed, the ReCAAP ISC is concerned about the increase in the number of incidents. With 14 incidents occurred over a period of seven months (Feb-Aug 2019), it is about an average of two incidents occurred per month. 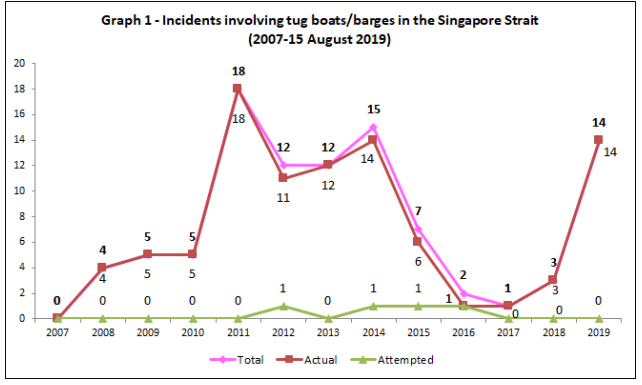 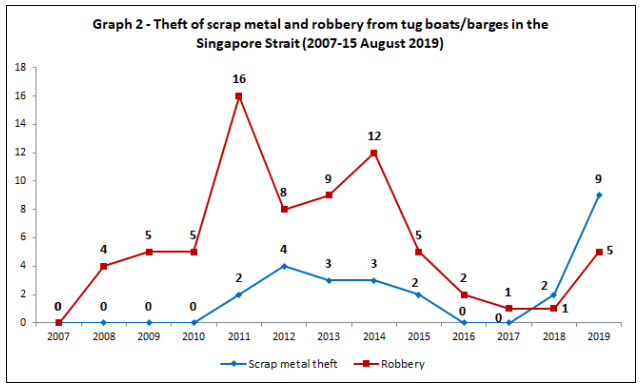 Key insights of the 25 incidents

-Flag of ships: Of the 25 incidents, 20 were Malaysia-registered tug boats, four were Singapore-registered tug boats and one had no information on the flag of the ship. There is no evidence to indicate that certain flag ships were targeted by the perpetrators. The perpetrators were opportunistic in nature and targeted ships that were less vigilant, slow moving and with low freeboard.

-Economic loss: The perpetrators were more interested in stealing scrap metal from the barges which indicates that the gains from selling the stolen scrap metal is lucrative and there is demand in ‘black markets’.

Prior to entering the area, ship masters are to conduct voyage risk assessment, prepare emergency communication plan, and adopt preventive measures taking reference from the ‘Regional Guide to Counter Piracy and Armed Robbery against Ships in Asia’.

While transiting the area, the ship master and crew are advised to adopt the following measures:

Feedback from some tug boat companies on the measures they adopt to prevent boarding by the perpetrators are as follows:

The ReCAAP ISC urges the relevant littoral States to step up surveillance, increase patrols and response promptly to all reports of incidents...Enhanced cooperation and coordination among the littoral States in information sharing and operational responses is required to address the increase in the number of incidents in the Singapore Strait, 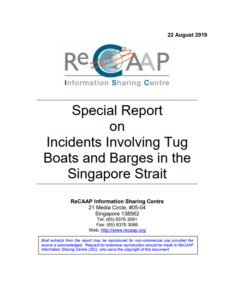