There is no standard, unequivocal definition of Short Sea Shipping (SSS). However, the European Union (EU) defines SSS as the movement of cargo and passengers by sea between ports situated in geographical Europe or between those ports situated in non-European countries with a coastline on the enclosed seas bordering Europe.

For shipping, and particularly for SSS, there are obvious and immediate benefits from improving data sharing systems. Assisting all those involved in the port call process (shipping companies, port service providers, and ships’ agents) to give better information, more easily is essential for better decision making and improved efficiency. An analysis of recent port call statistics for the Port of Limassol, Cyprus, indicates that there is scope to improve port call data sharing through applying the Port Collaborative Decision Making (PortCDM) concept.

As nodes within maritime transport networks, ports are crucial to the success of many of the available intermodal options. Frequently, however, they are seen as bottlenecks in the transport chain that reduce the competitiveness of maritime corridors. This is because of such things as the lack of good road and rail links to ports, the low adaptability of port capacity to SSS, but, a less than optimal level of reliability and often un-coordinated administrative formalities.

Port charges make-up 40 to 60% of overall transit costs in SSS, whereas port charges in deep-sea transport are only 5–10% of the costs[ii]; thus, increasing port efficiency by reducing waiting and turnaround times is important. Within this context, an appropriate analysis of port efficiency, therefore, becomes an absolute prerequisite to identifying the port-centric factors that crucially influence the success or failure of policies to promote more sustainable freight transport and to inform future policy on such matters. An efficient port has the scope to charge higher prices by providing faster and more reliable services or allowing shippers to reduce resources elsewhere in a supply chain.

A conservative reduction of the time in port of up to four hours together with a corresponding speed reduction at sea, provides the potential for increased energy efficiency of between 2% and 8%. A port’s turnaround efficiency is one of the most important determinants of waterborne transport costs.

Port operators and service providers all need a sound framework and accurate data for planning their operations. To realize a port call that meets expectations, such as fast turnaround, just-in-time operations, and minimal waiting times for all involved, all parties need to ensure that they have access to the necessary data for their planning in a timely fashion. This includes data related to a port’s internal capabilities (such as the availability of resources and infrastructure required to serve a ship), as well as data on external conditions (such as the progress of a ship being served in a previous port and/or ship travelling towards a specific port). This means, for example, the ability to forecast with high precision the time of departure of a ship from a specific berth location, especially when another ship is planning to use the same berth soon. The same goes for ship movements.  A port should be able to forecast with high precision the Estimated Time of Arrival (ETA) of a particular ship to its service area. Data sharing is key to realizing a successful and timely port call, as described in the PortCDM concept.

To both manage and avoid unforeseen disruptions, STM includes PortCDM as the mechanism for expanding the planning horizons of port call processes, and the alignment of all actors in port call operations. Coordination is based on standardised data sharing that captures the spatial and temporal nature of a port call. These shared data can also constitute a valuable system of record for efficiency analysis and port planning.

PortCDM builds upon the idea that the timing of intentions and time when actions are completed are shared via a standardized message format. Each message has a timestamp (for example, when an event is planned), along with the required resources and location, as appropriate. The shared data should cover all the different dimensions of the port call process, from a ship’s intended arrival at the port area until it leaves after having been served according to the purpose of call.

As identified during validation of PortCDM, there is a desire for a downstream port to know the progress in the current port visit and to know the status of subsequent ports in a sequence of port visits. Special focus is directed towards the provision of data of the estimated and actual time of departure from the previous port (ETD and ATD) and the ETA to the next port. These data when accurately communicated between ports can form the basis for better coordination of the port call activities at the port of destination, especially when there is only a short distance between the visited ports. This is particularly important in SSS because of the short time horizon for the planning of operations.

In the case of Cyprus, more than 90% of its seaborne transport is currently SSS. The geographical location of Cyprus encourages the use of its ports as transhipment hubs for SSS (see Figure 1). 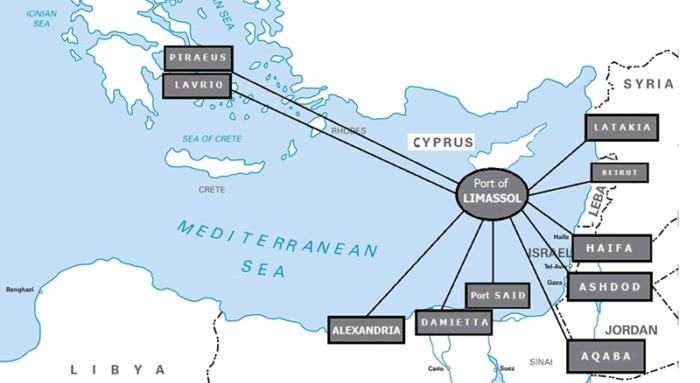 To be a successful transhipment hub, a port must be able to plan its operations precisely and ensure that relevant data are available for visiting ships as well as for neighbouring ports. This is particularly important for Cyprus as the distances between Limassol and its neighbouring ports are quite short.

Over the last three and a half years, the Port of Limassol has participated in the validation of the PortCDM concept as part of the Sea Traffic Management (STM) Validation project. In doing so, it has progressively developed a maturity in sharing relevant data among key port call actors. PortCDM enables real-time situational awareness for all participants involved in a port’s activities leading to increases in operational efficiency within and around the port. The scope of this work extends from coordinating operations within the port to collaborative decision-making between ports of departure and arrival. The recent introduction of the S-211 digital data exchange standard for sharing time stamp data provides a foundation for developing new services for Port-to-Port (P2P) collaboration.

P2P communication is a lubricant of SSS and is particularly important for the various operators at Limassol. The main problem currently identified by all operators is the inability of ships and shipping agents to provide accurate estimates of a ship’s intended arrival (ETA).

Port call data for 8070 port call visits to Limassol in 2017 and 2018 were analysed, and they clearly show the need to improve the efficiency of port calls. The results may be typical of many other ports. The analysis looked at various combinations of ship type, origin, port call managing agent and the impact on arrival, berthing times and berth occupancy. In all cases, there was a wide variation in effectiveness. As has been recently shown in the validation of PortCDM, the cause of this variation stems from the lack of sharing timely and reliable data on the planning and progress of key port call events, such as ETA and the availability of resources, both in port and in the case of SSS, between ports of departure and ports of arrival.

Berth utilization followed similar patterns to berth waiting times, with statistically significant differences among all ship categories. Once again, passenger ships exhibited high berth utilization (95%) as they typically proceed to berth without delay and remain there until departure.

Ships arriving from Northern Europe and Asia exhibited high arrival punctuality (61% and 58% arrived within 30 minutes of their ETA, respectively), while ships arriving from the Black Sea and Asia regions suffered the longest waits for a berth, with only 11% and 15%, respectively, berthing within an hour of arrival in the port area.

In the two years of data that was analysed, the 8070 port calls were managed by 92 different shipping agents. Nine agents handled about half of the traffic at the Port of Limassol. The top 27 agents each managed more than 100 port calls each and accounted for 86% of the total traffic.

Among the top 27 agents, there were significant variations in arrival punctuality (arrival within 30 minutes of ETA) which varied between 29% and 92%; while berth waiting time (berthing within an hour of arrival) varied between 3% and 93%. Based on the observed data, some agents were highly effective in ensuring that their ships arrived just-in-time at the port and were berthed with minimal delay, while others exhibited the exact opposite behaviour. Overall, the analysis revealed that there was considerable variation in the performance of shipping agents.

Considering the port call data analysis described above and the experience from validating PortCDM, the ports of Cyprus, and especially the Port of Limassol will be upgraded as information hubs, exchanging information with both nearby ports and ships in the Eastern Mediterranean. This will enhance the capabilities of all port actors involved in the port call process including the shipping agents. Moreover, the enhanced data sharing capability is expected to help establish the Cyprus ports as transhipment hubs for SSS, which will be realized in the newly approved STEAM project, by improving their competitiveness.

The experience of the Cyprus ports is not unique, it illustrates a phenomenon that exists all over the world. It follows that every port should become connected to other ports to provide more efficient SSS. Many of the world’s ports, large and small, are confronting the same issues about making SSS more efficient - this applies equally in developed and developing countries. Better data sharing based on the PortCDM concept can help overcome problems observed and contribute to make shipping cleaner, safer and more efficient and to meet sustainability goals advocated by the United Nations.

The views presented hereabove are only those of the authors and not necessarily those of SAFETY4SEA and are for information sharing and discussion purposes only.