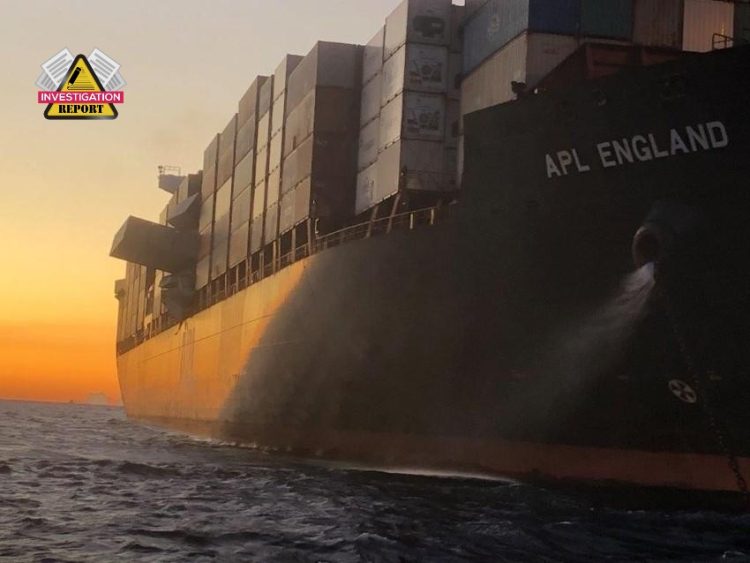 ATSB published its final report into the loss of containers from “APL England” off Sydney in 2020, noting the importance of vessel fixtures being regularly maintained to ensure they are secure and stable.

The vessel’s load computer results based upon ship conditions on departure from Ningbo showed 9 lashing force exceedances, from 102–107% of the maximum force. The master and chief mate accepted these values in the knowledge that changing ship conditions (ballast and fuel) would bring these forces within the acceptable range as the voyage progressed.

On 23 May, at 0800 Eastern Standard Time,3 the ship was 20 NM north-east of Port Macquarie, making good a speed of 14 knots, in north-westerly winds to force 54 (17–21 knots) with 2 m seas on a 2.5 m swell. Over the following hours, the weather deteriorated as the winds moved round to the south and the seas increased. The ship’s pitching and rolling motion also increased. The master ordered the ship’s speed reduced to about 7 knots as the ship was ahead of schedule into Melbourne, and advised the officer of the watch (OOW) to use hand steering as required to reduce the motion.

The master rested from 2030 to 2300 and then returned to the bridge. At midnight, the OOW recorded in the bridge log south-westerly winds to force 9 (41–47 knots), high seas (sea state 7, 6–9 m wave height) on a southerly 4.5 m swell. At about 0100, with intermittent use of hand steering, the master felt the rolling was acceptable and returned to the accommodation to sleep.

The duty engineer completed the evening inspection of the engine room and at 2130 responded to an engine room alarm. The alarm reset when accepted by the duty engineer, who then returned to the accommodation at about 2200 and went to sleep. At 2326, and again at 2347, the engineer responded to alarms sounding, silencing them on each occasion. The engineer found no faults and attributed the alarms to the motion of the ship.

At 0215 on 24 May, when about 40 NM east of Sydney, the ship underwent a series of heavy rolls. Crew members, including the master and the duty engineer were woken by the heavy rolling, and unsecured items moved and fell to the deck. The master went to the bridge where the OOW (second mate) had re-engaged hand steering in response to the significant movement.

Just after being woken, the duty engineer received a telephone request from the OOW to stand by in the engine room. At about that time, an engine room alarm sounded, and the engineer went to the engine room to attend to it. The alarm reset upon accepting.

The heavy rolling dissipated while the ship continued to pitch noticeably. At about 0230, the master changed course more southerly to 195°, and maintained a ship speed of about 7 knots in 40–45 knot winds from ahead (south-westerly). This reduced the ship’s motion and the master retired again at about 0300. The duty engineer remained on standby in the engine room and kept watch from the engine control room.

At 0400, the third mate took the navigation watch (OOW), and at about 0420, the master again awoke and returned to the bridge. The ship’s course was altered to 185°, and hand steering used as necessary. The master remained on the bridge, and the duty engineer remained in the engine room.

Just after 0600, the ship was on hand steering and maintaining its southerly course at about 7 knots. Conditions remained unchanged with the ship pitching and periodically rolling more noticeably in high seas and gale force winds

At 0610, 46 NM south-east of Sydney, the ship underwent a series of very heavy rolls, to about 25° either side of upright. Again, many items moved and fell to the deck, including those which were previously secure, and personnel held on to maintain their footing.

The movement also resulted in activation of a steering system alarm, followed by an engine room alarm at 0610:28. The duty engineer was seated at the engine control console (near the alarm acknowledge push button) when the heavy roll and alarm occurred. The engineer had to hold on for security and answered the engine alarm 6 seconds after it sounded.

The ship continued to roll heavily. At 0610:53, 25 seconds after the initial alarm, the main engine shut down due to loss of engine lubricating oil pressure.

The OOW noted the loss of power and slowing of the ship. They alerted the master to the loss of propulsion and, following standard procedure, moved the engine telegraph to ‘stop’.

At 0611:50, the duty engineer informed the OOW that, with the engine telegraph set to ‘stop’, the engine could be started again once the alarms had cleared and the main engine shutdown lockouts had reset. The main engine was subsequently restarted, dead slow ahead.

As early as 21 May, APL England received Bureau of Meteorology (BoM) reports of high seas gale and storm force wind warnings, issued through the enhanced group call automated communications system. At about the same time, the master received similar information regarding a low pressure system and high seas developing along the south-east coast of Australia, from supporting company and commercial weather services. The warnings continued over the following days.

As the ship reportedly rolled beyond its design limit, the ATSB considered the possibility that the loss of containers was entirely due to forces associated with excessive rolling. However, as a factor of safety is applied to the securing fixtures, ultimate failure of these components should not occur close to the design limit if they are well maintained. On this occasion many of the fixtures securing the lost containers had been significantly reduced by corrosion, it was therefore considered likely that their poor condition also contributed to the incident.

APL England’s cargo securing manual (CSM) only allowed 40 ft containers of standard height (8 ft 6 in) to be loaded into bay 62. Stowage in accordance with the CSM would have ensured that the lower 4 tiers of containers were securely held within bay 62’s cell guide structure. It would also have ensured that about 1.5 m of the tier 5 containers were held within the cell guides, that is, over half of the tier 5 containers’ vertical extent would have been secured within the cell guides. The CSM’s lashing arrangements then called for the bottom of tier 6 to be secured to the top of tier 5 with twist locks and tier 7 to tier 6 similarly. In addition, tiers 6 and 7 were to be secured by lashing rods and turnbuckles to lashing plates.

The ATSB found that APL England’s fixed container securing arrangements on deck were in a poor state of repair and the strength of many securing fixtures was severely reduced by corrosion.

In the seas encountered, the fittings failed, and containers were lost overboard. The investigation also found that this condition would have taken several years of poor maintenance to develop.

This showed that the ship had not received the scrutiny from crewmembers, shore management or other agencies that a ship of its age or condition required. This presented an increased risk to the continued safe operation of the vessel, security of the cargo carried, and safety of crew members working around the containers.

In addition, the investigation found that procedures for adverse weather were not followed. Had these procedures and associated assessment tools been used, navigational and operational decisions could have been made, which would have better prepared the ship for the conditions encountered.