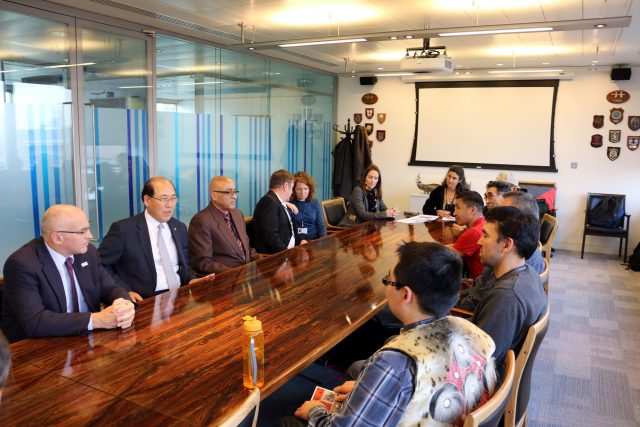 The safety and environmental impact of arctic shipping was on the agenda as IMO Secretary-General Kitack Lim received a delegation of arctic indigenous leaders at IMO Headquarters, London yesterday, on 25 October. In the first meeting of its kind, a wide-range of issues surrounding climate change and the subsequent increase in number of ships operating in arctic waters were discussed. Secretary-General Lim outlined IMO’s work in this field, in the form of IMO’s Polar Code, which will enter into force in January 2017.

The Code applies to ships operating in Arctic and Antarctic waters, provides for safe ship operation and protects the environment by addressing the unique risks present in polar waters but not covered by other treaties.

Mr. Lim expressed his appreciation to the leaders for meeting him and providing their valuable input, and iterated his support for United Nations Secretary-General Ban Ki-moon’s recent address to the Arctic Circle Assembly, in which Mr. Ban highlighted the importance of the UN Declaration on Rights of Indigenous Peoples as “our inspiration for how to recognize and respect indigenous peoples through our actions and initiatives”.

Additionally, a special panel discussion in IMO’s main conference hall will see the indigenous leaders speak directly to IMO about living on the front line of expanding Arctic shipping. The “Arctic Voices” discussion takes place today on 26 October, at 1.30pm, in between sessions of IMO’s Marine Environment Protection Committee (MEPC 70), which is taking place this week.