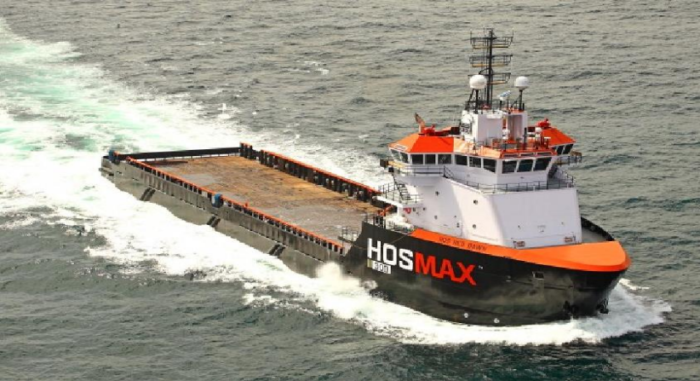 ​The US National Transportation Safety Board released its report on the diesel generator failure on board the offshore supply vessel 'Red Dawn', on December 13, 2017. Namely, as the ship was on its way to resupply the radar station Sea-Based X-Band Radar, its number 2 main diesel engine suffered a mechanical failure. This led to the ejection of components from the cylinder block, which destroyed the engine.

On the afternoon of December 13, the main diesel generators (MDG) 1 and 4 of 'Red Dawn' were on line. The chief engineer and the assistant engineer had just returned to the port engine control room (ECR).

Shortly after, another alarm followed along with the shutdown of MDG number 2. At the same time, the engineers heard the automatic startup of MDG number 3 and saw the engine automatically synchronize with the electrical bus. In the meantime, in the wheelhouse, the mate on watch and the captain heard an explosion and received a smoke alarm for the port generator room, which contained MDGs number 1 and 2. No one was in that space at the time of the incident.

When the chief and the assistant engineers entered the port generator room to investigate, they discovered dense white haze/smoke but no sign of a fire. The smoke dissipated after about a minute and they saw lube oil on the deck plates on the outboard side of MDG number 2. They also notices numerous internal fragments of MDG number 2 lying on the deck in a puddle of lube oil on the inboard side.

The chief engineer returned to the port ECR, informed the captain, and continued to monitor the operating temperatures and pressures of the remaining online MDGs, namely 1 and 3. The captain made notifications ashore while the chief engineer documented the damage and photographed the area. The vessel resumed its voyage, with the crew helping the engineering staff in cleaning up the lube oil and collecting the fragments in the port generator room.

​The National Transportation Safety Board determined that the most probable cause of the mechanical failure that took place on board the offshore supply vessel Red Dawn was a connecting rod assembly on the number 2 diesel engine, which became loose and separated from the crankshaft due to improper tightening of the connecting rod bolts during the previous engine overhaul.

For more details into the incident, click on the PDF herebelow 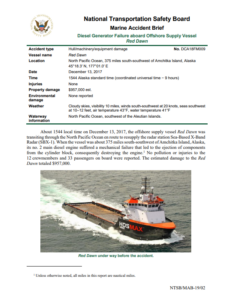