When the rubber meets the deck

by Capt. VS Parani
in Opinions 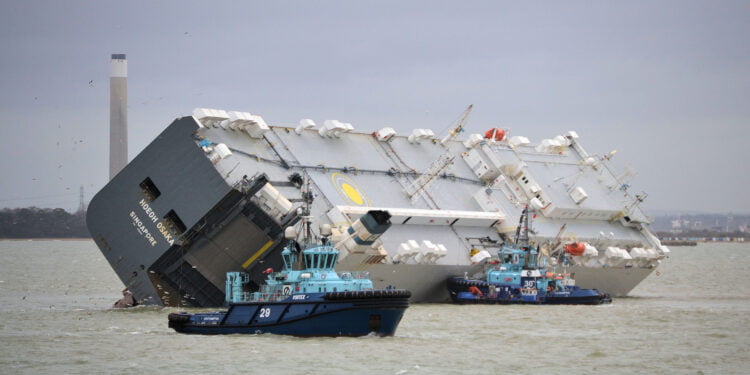 Whenever there is an accident involving the loss of cargo on a ship, the blame is often placed on the ship’s crew but is this justified? Are we ignoring issues in the cargo chain upstream, and during the shore-ship interface?

In January 2015, the pure car and truck carrier Hoegh Osaka developed a list of over 40° when turning a bend while departing Southampton. The ship subsequently lost power and grounded. The ship was refloated after a few weeks but there was no pollution. One crew member was injured and there was some damage to the cargo and the hull. The reason for the excessive list was that the ship had insufficient stability.

During the loading operations at Southampton, the port captain arranged for some high and heavy cargo to be loaded but did not inform the chief officer or the ship’s duty officer. The port captain also carried out a pre-stowage cargo plan meeting with the stevedores in which the chief officer was not present. The final cargo tally provided to the ship did not reflect the actual weight of cargo loaded. New cars were given estimated weights instead of the actual weights of the individual vehicles. These factors led to the ship’s actual stability being less than calculated and being insufficient. The UK Marine Accident Investigation Branch (MAIB) investigated the accident and commented that a difference in national cultures of the ship’s crew and the port captain was likely to have influenced the lack of challenge of the cargo plan, and information exchange between the port captain and the chief officer.i

Similar to over-reliance on the pilot being a major cause of navigational incidents in port, there is evidence that ship stability and cargo operations do not receive the necessary attention or resource management onboard the ship. Ship-shore interfaces are a particular point of vulnerability.

On the container ship Annabelle, a stack of seven containers collapsed in heavy weather in February 2007. The MAIB found that this container row exceeded the allowable stack weight. There were differences in the shore planning computer and the ship’s loading software which contributed to the problem. But more than technical issues, the MAIB recommended that the maritime industry develop a best practice safety code to ensure that effective communications and procedures exist between all parties involved in the planning and delivery of cargo (containers) to ensure the ship’s staff have the resources and the opportunity to safely oversee the loading and securing of cargo.ii

Whenever a maritime accident occurs, fingers usually point towards the ship’s crew followed by a recommendation to improve safety measures onboard. But it cannot stop there. Consider this:

The maritime industry cannot accept the status quo that such practices exist in certain trades or regions. Accepting weaknesses in the upstream cargo chain creates holes in the (Swiss Cheese) defences against failure,vi and it has a rub-off effect on the ship’s team.

On the Hoegh Osaka, the MAIB opined that the port captain’s decision not to involve chief officer probably influenced the ship’s team who did not carry out their internal pre-stowage meeting. On this ship (and anecdotally in the ro-ro trade), it had become a routine practice for the ship to sail before its departure stability condition had been accurately calculated. Although the master was advised by the chief officer before departure that the ship’s GM met the requirements of the loading and stability information manual, the master was unaware of how it had been calculated or on what information the calculation was based. Neither had the master verified the proper completion of any of the cargo-related checklists during the voyage.

Following some of the above-mentioned accidents, it must be appreciated that the IMO was instrumental in developing the 2014 IMO/ILO/UNECE Code of Practice for Packing of Cargo Transport Units (CTU Code). But this global code of practice for the handling and packing of cargo transport units for transportation by sea and land is still non-mandatory! It is no wonder that even after the Code was introduced, improper packaging and cargo declaration led to the fire on the Maersk Honam (with the death of five crew members) in 2018, and the fire and sinking of the X-Press Pearl in 2021. What are we waiting for? I’m sure there are other codes that need to be introduced urgently for upstream cargo handling and during an interface with the ship.

There is also an opportunity here for data exchange and providing actionable inputs through big data analytics and machine learning. Why estimate cargo weights or characteristics when there are various ways through which the data can be automatically captured, transmitted, and processed?

From a human-organisational perspective of ships, if a navigational voyage plan is checked by other officers, why not the loading manual or the stability conditions? There are watch standing levels for the Bridge but why not for cargo operations? The requirements are not uniform across companies and ships.

Similar to the focus on familiarization with the ECDIS, why is there not sufficient focus to ensure that the deck officers are proficient in the use of the loading computer? Or a system of verification of the inputs and outputs?

The latest revision of the IMO STCW Convention in 2010 required the officers on board, i.e. the need to show proficiency in knowledge concerning the human element, leadership, management, and teamwork skills. In most instances, this training is delivered as part of Bridge or Engine room Resource Management, or Maritime Resource Management. Can we please also include resource management, risk management and teamwork training for cargo operations, not just for the crew but also the shoreside personnel involved in the cargo chain?

The training of shoreside personnel may not fall within the scope of the STCW Convention but it is up to intergovernmental organizations to find a suitable training framework.

A word of warning on training though- let’s not just wash the responsibility off our hands by introducing another weekend training course but let’s be thoughtful about how the risk management throughout the cargo chain is carried out from source until destination. A review of the effectiveness of resource management training recommends that for such skills to be effectively applied, it needs to be context-bound, and the knowledge transfer should take place in an environment where the action takes place, i.e. the ship, or the terminal. The learning environment will then be as close to reality as possible.vii

An increased focus on the cargo handling process will help ensure both the ship and terminal crew are better prepared when liquified petroleum gas or blanketing-nitrogen enters the ship’s manifold, or containers are loaded on the deck, or nickel ore is poured into the cargo hold, or the car’s rubber tyre meets the ship’s deck.

i UK Marine Accident Investigation Branch, Report on the investigation into the listing, flooding, and grounding of Hoegh Osaka Bramble Bank, The Solent, UK on 3 January 2015, Report No 6/2016, March 2016

Captain VS Parani, FNI, FICS, CMarTech-IMarEST is currently Vice President - Marine at Tufton Asset Management Ltd., Cyprus. He is also the author of Golden Stripes - Leadership on the High Seas and producer of the GoldenStripes Podcast. He can be reached at parani.org