The Italian con/ro 'Grande America' caught fire, approximately 140 nm off Finistère, forcing all 27 members of her crew to abandon ship, on March 10. After being informed  by the captain that the vessel was on fire, the Royal Navy diverted to the scene to provide assistance. Although no one from the crew was injured, some required hospital treatment.

Specifically, the French Maritime Agency Premar Atlantique received a distress call from the America at 2000 hours on the night of March 10.

The con/ro's master firstly announced that it would voyage to a port of refuge at A Coruña, Spain. However, the situation on board quickly worsen. The fire grew out of control, with several containers burning on board, and the ship halted her course. 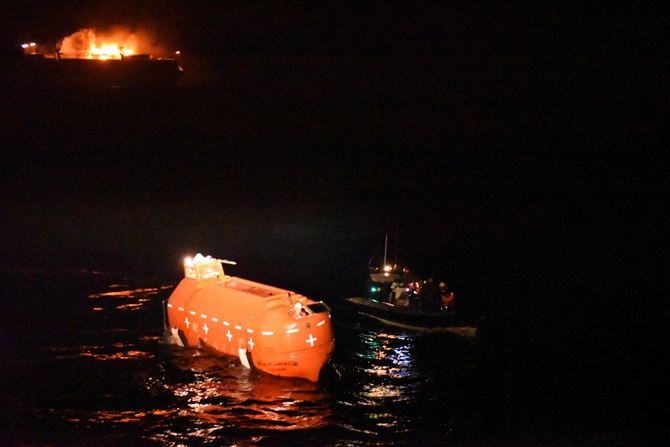 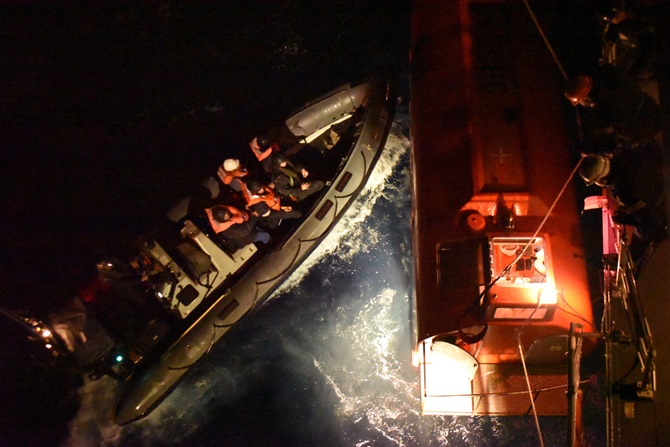 The Royal Navy frigate 'HMS Argyll' went to assist, along with the rescue tug 'Abeille Bourbon'.

At about 0200 hours, the fire was out of control. Therefore, the master of the ship ordered the crew to aboard the vessel. Consequently, all 27 crewmembers aboard one lifeboat.

The conditions were horrendous – the vessels were rolling at 30 degrees which made it extremely hairy getting the sailors safely on board.

Due to bad weather and heavy seas, the lifeboat got damaged and wasn't able to voyage on its own. HMS Argyll launched her small boat, which pushed the lifeboat alongside the frigate so that the America's crew could transfer over.

By 0400, Argyll's crew successfully brought all of the survivors aboard.

Although the crew reported no injuries, a medical transport helicopter based in Brest provided them with medevac services on March 11.

As Lieutenant Commander stated, every one of the crew members suffered smoke inhalation.

Concluding, Premar Atlantique reported that the Abeille Bourbon remains on scene and is working to fight the fire using her water cannon. The agency has asked the America's operator to formulate a salvage response plan.