USCG oversees removal of pollutants from grounded vessel off Hilo 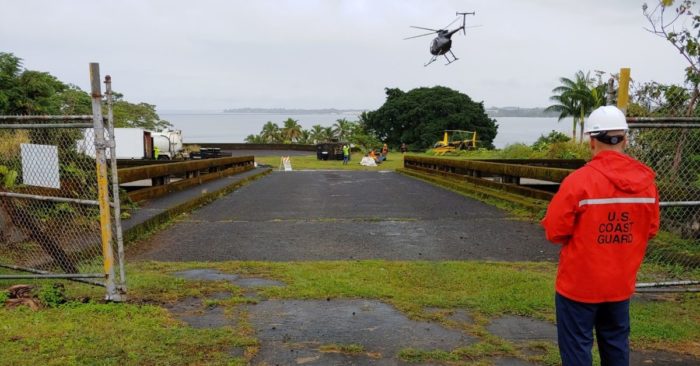 According to a recent statement, US Coast Guard responders are working to remove potential pollutants from the 63-foot fishing vessel Midway Island, which ran aground off Hilo.

In fact, the USCG is working with the Department of Land and Natural Resources and contractor personnel to mitigate the potential pollution threat from the vessel. Reportedly, a maximum potential of 1,800 gallons of diesel and two marine batteries are aboard.

Yet, there are no other reports of personnel injuries, pollution, or impacted wildlife.

Pollution response measures were expected to start on Thursday, February 6, weather permitting. Drone assessments conducted on Wednesday, February 5, produced good footage of the environment and condition of the vessel.

It is said that a safety zone has been established and extends 100-yards in all directions from the vessel’s location on the rocks northwest of Hilo Harbor. The Coast Guard is now asking the public to remain clear of the safety zone to prevent injury or impact to operations.

The safety zone , but also a Broadcast Notice to Mariners will be in effect for the next six days.

More specifically, a lightering team will begin to mitigate the pollution threat from the vessel by pumping the diesel fuel into 55-gallon drums. Full drums will be airlifted by helicopter to a designated landing zone and then transferred to a vacuum truck for proper disposal.

Mitigation measures will be continuously reevaluated and are subject to the effectiveness of lightering operations.

A standby vessel and rescue swimmer will be onsite during operations to assist if needed. The team will also be monitoring weather continuously as it may affect operations. The Coast Guard will continue to oversee assessment and mitigation efforts, working in partnership with the State of Hawaii and local officials.

In fact, at 1733, on Monday, February 4, the Coast Guard Sector Honolulu watchstanders received a report from Hilo Fire Department of the grounded vessel, named Midway Island, on the rocks northwest of Hilo Harbor with a mariner aboard.

Hilo Fire Department responded with engine, fire boat, and aircrews. Their aircrew arrived on scene and hoisted the mariner to safety.

Also, a HC-130 Hercules aircraft and crew launched at first light Tuesday with a Coast Guard pollution responder aboard from Sector Honolulu to conduct an aerial assessment of the surrounding area for pollution threats.

The cause of the grounding is still under investigation.

Recently, Salvors on the Norwegian Coast Guard vessel KV Svalbard were preparing to remove fuel from the trawler Northguider, which ran aground in the Hinlopen Strait, on 28th December, with 14 crew on board.

The Northguider was fishing off Svalbard archipelago when it ran aground in the Hinlopen Strait and started taking water. The Captain called for help and in less than two hours, two helicopters rescued the crew. No injuries were reported and they have all been transported to Longyearbyen.