Preparations start to remove fuels from grounded trawler at Svalbard 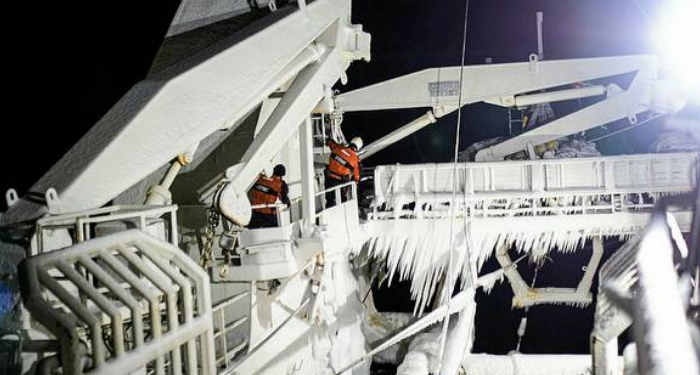 Salvors on the Norwegian Coast Guard vessel KV Svalbard are preparing to remove fuel from the trawler Northguider, which ran aground in the Hinlopen Strait, on 28th December, with 14 crew on board.

The Northguider was fishing off Svalbard archipelago when it ran aground in the Hinlopen Strait and started taking water. The Captain called for help and in less than two hours, two helicopters rescued the crew. No injuries were reported and they have all been transported to Longyearbyen.

However, the Northguider had 300,000 litres of diesel oil at the time of the incident. Now, and operation is ongoing to secure and save the vessel. This is important because the nature in this area is vulnerable and oil spill could cause serious.

Now, Norway’s Coastal Administration, the Norwegian Coast Guard, and the shipowner want to prevent any pollution incident. With the current circumstances, the Northguider could be refloated, but in case something goes wrong, the responders want to prevent any danger to the marine environment.

For this reason, a team from the Norwegian Coast Guard icebreaker KV Svalbard has started preparations to remove the fuel from the ship. Namely, salvors boarded the Northguider to clear access to the fuel tanks and remove potential pollutants. They also closed as many valves as they could and bulkhead penetrations on board. They also performed an ROV survey around the trawler’s hull to detect any damage.

As Northguider sits in water too shallow, all operations will be carried out  with small boats, sources report. Salvors hope that on January 10 they could be able to leverage the good weather in order to remove as much fuel.