UNCTAD published its Review of Maritime Transport for 2018. This report is published annually since 1968 and provides an analysis of structural and cyclical changes affecting seaborne trade, ports and shipping, as well as an extensive collection of statistical information.

According to the report, global seaborne trade is doing well, as it is supported by the 2017 increase in the world economy. Expanding at 4%, the fastest growth in five years, global maritime trade gained momentum and raised sentiment in the shipping industry. 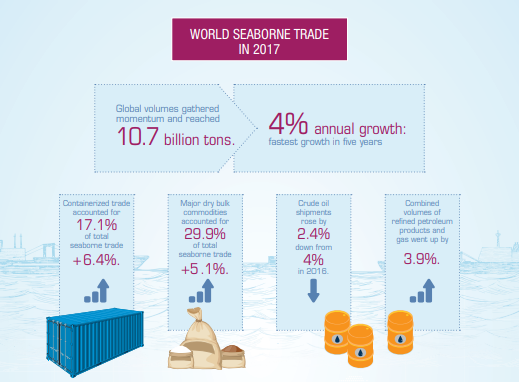 Regarding the prospects for seaborne trade, downside risks such as increased inward-looking policies and the rise of trade protectionism are still putting pressure on the outlook.

One of the immediate concerns of this situation, based on the report, is the trade tensions between China and the United States, the world’s two largest economies, as well as those between Canada, Mexico, the United States and the European Union.

Trade frictions may lead to a trade war that could derail recovery, reshape global maritime trade patterns and dampen the outlook.

What is more, the ongoing global energy transition, structural shifts in economies such as China, and shifts in global value chain development patterns, are all factors that increase the uncertainty.

However, the report mentions that if used effectively, game-changing trends, such as digitalization, electronic commerce (e-commerce) and the Belt and Road Initiative, whose impact is still not fully understood, can drive global seaborne trade.

2. Digitalization, e-commerce and the implementation of the Belt and Road Initiative

Digitalization of maritime transport will help the industry respond to the increased demand with enhanced efficiency.

Mergers and alliances are a response to lower demand levels and oversupplied shipping capacity. However the way they affect competition, and the potential for market power abuse by large shipping lines remains a concern.

5. The relationship between ports and container shipping lines

The value of shipping can no longer be determined by scale alone. The ability of the sector to use relevant technological advances is as increasingly important.

Efforts to limit the carbon footprint and improve the environmental performance of international shipping remain high on the international agenda. The initial strategy adopted in April 2018 by the IMO to reduce annual GHG emissions from ships by at least 50% by 2050, compared to 2008, is a particularly important development.

You can read more in the PDF herebelow