With carbon pollution, temperatures, and climate destruction on the rise, the Summit aspires to provide a turning point into momentum, action, and global impact.

The UN estimates that the world would need to increase its efforts between three and five times to contain climate change to the levels dictated by science - a 1.5°C rise at most - and avoid escalating climate damage already taking place around the world.

Nevertheless, the Paris Agreement provides an open-door framework for countries to continuously supply their positive actions, and the Summit showcases how governments, businesses, and civilians around the world are rising to the challenge.

The best science, according to the Intergovernmental Panel on Climate Change, tells us that any temperature rise above 1.5 degrees will lead to major and irreversible damage to the ecosystems that support us. Science tells us that on our current path, we face at least 3-degrees Celsius of global heating by the end of the century

The Climate Investment Platform will seek to directly mobilize US$1 trillion in clean energy investment by 2025 in 20 least developed countries. The platform will provide a menu of services to governments and private sector clients in their efforts to scale-up energy transition and accelerate investments for low carbon, climate-resilient development. It will also enable the delivery of ambitious NDCs.

In addition, the LIFE-AR initiative, led by least developed countries, will enhance South-South cooperation, aiming to mobilize US$30-40 million, and deliver pathways to climate-resilient development by 2030 and net zero emissions by 2050.

Small Island Developing States also make a collective commitment to raise the ambition of their NDCs by 2020 and move to net zero emissions by 2050, contingent on assistance from the international community. They intend to move to 100 percent renewable energy by 2030 and provide support for initiatives that aim to address immediate adaptation needs and the transition to climate resilience. 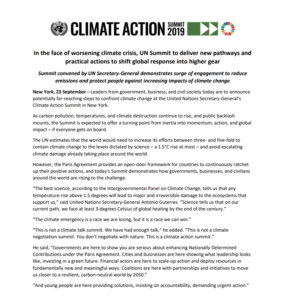