The container port of Buenos Aires in the mega-ship era

The International Transport Forum OECD issued a discussion paper analyzing key characteristics and challenges with respect to the Port of Buenos Aires, consisting the main cargo entry point for the province of Buenos Aires, where most of Argentina’s population, economic activity and manufacturing activity is concentrated.

The paper suggests that bigger ships, industry consolidation and increased trade will pose numerous challenges for the port of Buenos Aires, already constrained by modest performance. Policies have been adopted to improve this situation and additional potential measures are discussed.

The government’s transport agenda for 2016-19 contains many elements that should improve freight transport and maritime trade in Argentina, Olaf Merk from International Transport Forum notes. It is based on three strategic pillars covering all modes and providing an investment envelope of USD 30 billion:

While most of these funds are reserved for roads, a substantial part is also to be invested in freight rail and ports, in particular the port of Buenos Aires. Goals to be achieved in 2019 include an increase of rail freight transport of 50% and faster and more reliable water transport.

The question is how government policy addresses the main challenges related to the port of Buenos Aires, as identified in previous sections. This will be treated below, by assessing policies on container terminal capacity, port-city interfaces, hinterland connectivity and governance.

The paper endorses the government for its willingness to solve challenges related to the freight transport system, as infrastructure investments might solve bottlenecks and the focus on improving the port of Buenos Aires could reduce transport costs and thus facilitate Argentina’s trade.

The government has made a principled choice to open a public tender with competitive bids. The AGP has come up with a proposal based on the assumption that the port of Buenos Aires is only viable in the future if it has fewer but larger terminals with linear quays. Although these ideas are correct, one can wonder if the proposal in its current form will appeal to potential bidders.

The container port of the future needs to be deep and large with a fast turnaround. The port of Buenos Aires is at this moment none of the above. The AGP proposal will only solve these challenges partially. It envisages the deepening of the access channel, but to a depth that will only be sufficient for a few years, so dredging would need to be guaranteed constantly for the next 35-50 years. In addition, it is not very clear how current bottlenecks – such as waiting time in the access channel, high ship turnaround times, long container dwell times and expensive hinterland transport – will be solved with the proposed changes, 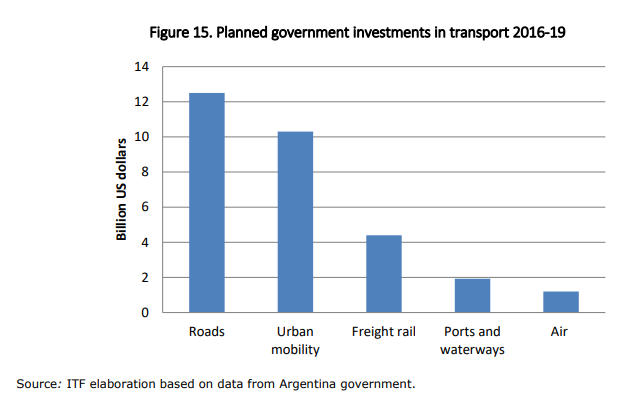 At a more strategic level, the evolution of a strategic vision on gateway performance in a competitive global economy raises questions about the role of local competition in a global economy, the paper notes.

At some point, micro competition can lead to fragmentation and time delays that are harmful in adjusting to the real competition which is global or continental.

Local competition strategies, like those at the origin of the Argentina port reform of the 1990s, seem less appropriate for the Argentine economy in 2017.

There are new policy options that seem better suited to efficient gateway performance and policy in the coming decades. Elements of such a policy could include road investments; support for rail investments as long as industry is reorganised; port administration reform; dredging to selected ports, possibly with port corporate reorganisation; research and support for information technology to facilitate more efficient integration of port, inland transport and warehouse operations, based on a holistic view of freight transport flows in Argentina.