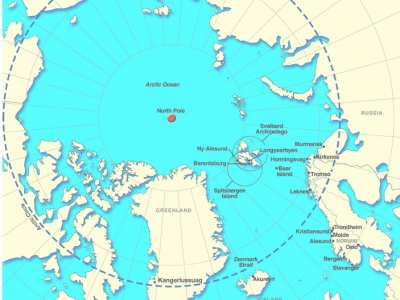 Stowaways threaten fisheries in the Arctic

An international team of researchers led by PhD candidate Chris Ware from the University of Tromsø in Norway has for the first time been able to calculate the risk of new species establishing themselves in Arctic waters. Specifically, the researchers have investigated the maritime traffic to Svalbard. Chris Ware explains:

The survey shows that up to one third of the 155 ships that entered the ports of Svalbard during 2011 came from ports that will in the future have an environmental match with Svalbard, thereby increasing the risk that harmful species, which may be brought in as stowaways on ships, will be able to establish themselves.

The stowaways can arrive either as biofouling on the outside of the ships or via water in the ballast tanks.

In 2011 ships that called at Svalbard emptied their ballast tanks 31 times, producing a total volume of 653,000 cubic meters, equivalent to more than 261 Olympic-size swimming pools. Considering each cubic metre of ballast water may contain hundreds of thousands of organisms, billions of organisms can be introduced by ships every year. Slightly more than half of the vessels had replaced the water at sea as required, for example in the North Sea.

The vessels had connections to four ecoregions with similar environmental conditions. Here the researchers know of a total of 16 introduced species, one of which comes from Svalbard.

14 of the remaining 15 species will be able to act as biofouling on the ships' hulls. Therefore, if the aim is to keep introduced species out, then only taking ballast water into consideration will not be enough.

Already in 2050 the climate around Svalbard will be more similar to the climate found in the ports to the south where ships to Svalbard typically depart from. This increases the risk that introduced species will survive and compete with the original species around Svalbard.

In 2100, the number of matching ecoregions will increase to nine, increasing the number of known harmful species with connections to Svalbard more than sixfold.