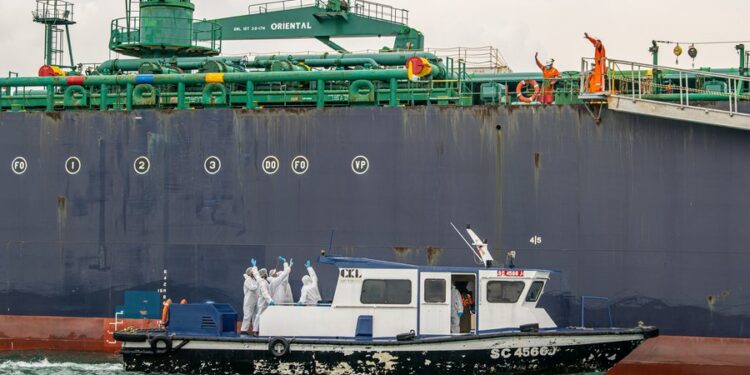 Crew bidding farewell to one another as they make their journey home / Credit: MPA Singapore

Working with the Ministry of Transport, the Civil Aviation Authority of Singapore, the Immigration & Checkpoints Authority, as well as shipping companies, MPA realized the second chartered flight for crew change on 12 June.

A total of 54 crew members onboard a flight from Mumbai, India will join six ships at the Port of Singapore. Meanwhile, 87 crew members will take the same flight back to Mumbai.

There is a global need for large numbers of crew changes to take place. We have seen a sharp increase in the daily crew change applications since our last Port Marine Circular (PMC). As a major port state, Singapore has a responsibility to facilitate crew change in a safe manner for both the country and the ships, given the ongoing pandemic,

MPA has been working closely with other government agencies, unions, and the shipping industry to facilitate and support crew change.

The shipping industry is obviously encouraged by the increasing number of crew changes taking place in Singapore, and we are appreciative of the great efforts made by the MPA and other agencies to bring this about. Given the enormous global scale of the problem…we hope that Singapore will continue to take a leading role and at the same time continue to work with the industry to review the protocols,