Responding to the latest Seafarers Happiness Index, seafarers have called for ship owners, operators and managers to have designated human resource management in place to address concerns and to reflect the growing appreciation and importance of seafarer mental health and wellbeing onboard.

This comes as the second quarterly report of 2018 sees seafarers experience an increase in happiness in relation to physical health opportunities and welfare facilities onboard, the Mission to Seafarers informed.

These figures represent a growing trend of the importance placed on the welfare of seafarers at sea, with seafarers requesting that ship owners and managers invest in a dedicated seafarer liaison officer, who would be responsible for ensuring seafarers’ welfare whilst at sea and at port.

Speaking about the report and what it means for the industry, its Founder, Steven Jones, said:

It is enormously encouraging that seafarers are getting involved and telling us about their experience of life onboard. Awareness and talk around seafarer mental health and wellbeing is having a profound impact on how seafarers are coping. 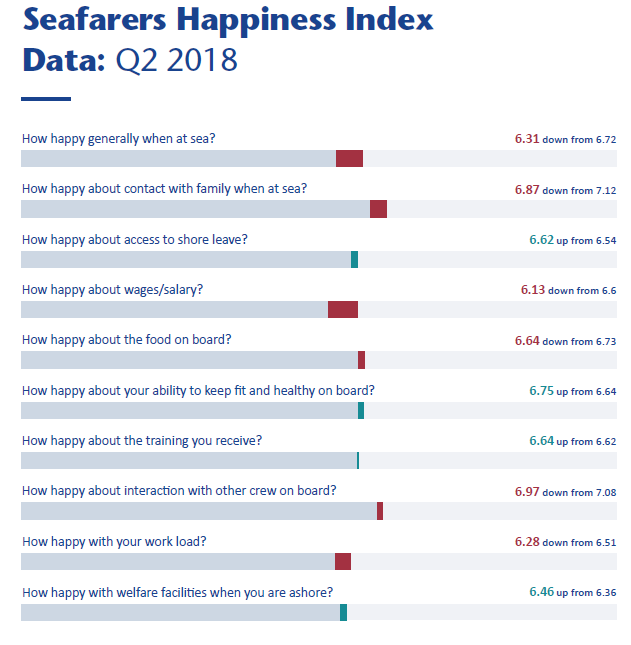 In this report, seafarers have indicated they wish to have a designated point of contact who deals solely with seafarer welfare and wellbeing. This serves as a reminder of why The Seafarers’ Happiness Index is vitally important, because it acts as a dialogue between the front line of the industry and the issues concerning seafarers which they may not otherwise have a chance to talk about,

For its Seafarers’ Happiness Index project, The Mission to Seafarers has been shortlisted in the ‘Initiative’ category of the 2018 SAFETY4SEA Awards, as it actually gives to seafarers a platform to share their hopes and concerns, 'a voice to be heard', promoting seafarers' wellbeing.