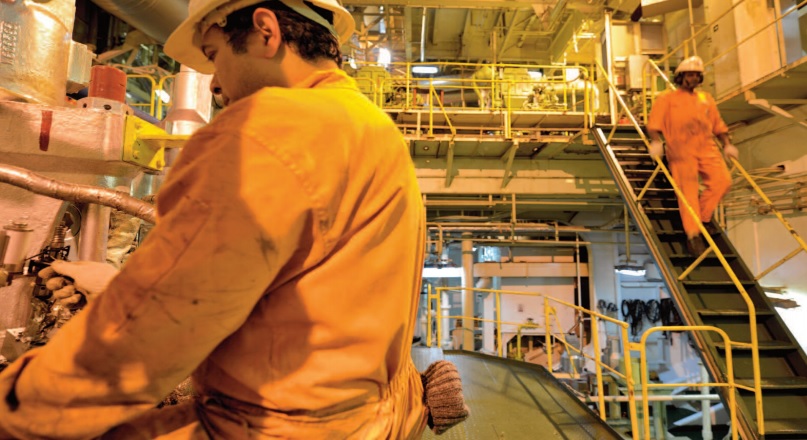 Risks of moving heavy objects while onboard

Presenting a recent case of crew moving steel plates in its monthly "Risk Watch" report, the Britannia P&I Club informed on the risks associated with moving heavy objects. According to the case, three crew members were moving ten pieces of steel plate around the steering gear room, while the ship was underway. Each piece measured 2.4m x 1.2m and was 5mm thick.

An oiler and an engine cadet were holding the plates against the railings in the engine room, while another oiler (positioned in the middle) was trying to secure the plates to the railings, using a piece of rope. The ship rolled unexpectedly due to the large swell and the plates moved, falling on top of the oiler, partially crushing him as he tried to escape. Britannia Club suggests that the oiler was extremely fortunate as the other crew members were there to help remove the plates, but he did suffer very serious leg, arm and internal injuries.

The ship was diverted, so that the oiler could receive emergency medical treatment. He spent six weeks in hospital before his condition stabilised sufficiently to allow his repatriation home, to continue his medical treatment.

The Club says that a risk assessment and tool box talk was carried out, but were found not to have been done properly. During the risk assessment process,the risk of personal injury was identified as highly likely. Therefore the task should not have been carried out without proper consideration of the lifting arrangements. In this case, the lifting should have been carried out using chain blocks or other specialised equipment, not just with a piece of rope. Also,the lifting arrangements should have been checked by a responsible officer which did not happen in this case. The tool box talk was a tick box exercise only; the risks were not discussed and the job was not adequately supervised as per the work plan.

The master’s analysis found that the root cause was a failure of compliance with the safe practices on board. These are:

Britannia recommends the following practices, in order to prevent shippers from similar accidents: