ReCAAP ISC launched its piracy weekly report concerning the timeframe between 28 January to 2 February 2020, reporting three incidents of category 4, with two of them occurring onboard vessels at anchorages in Indonesia and one in the Philippines.

The container ship Cosco Sao Paulo was at anchor in Manila, the Philippines, when its crew noticed a number of perpetrators having boarded the vessel. Two of the storage rooms were broken into.

Then, the crew searched for the perpetrators and checked on the inventory of the ship’s property.

The petroleum/chemical tanker FSL London was at anchorage in Belawan, Indonesia, when the duty officer on the bridge saw a suspicious boat heading out from the ship.

The investigation resulted that the perpetrators boarded the ship through the anchor chain hawse pipe.

The bulk carrier RHL Clarita was anchored at Taboneo, South Kalimantan in Indonesia, when the crew found out that the lock to the bosun store was broken, while the ship was missing two rolls of power cable (75 m) and one used rope (25 m) were stolen.

In addition, the crew never saw or found the perpetrators onboard. Yet, the incident was reported to the Taboneo rolls of power cable (75 m) and one used rope (25 m) were stolen. 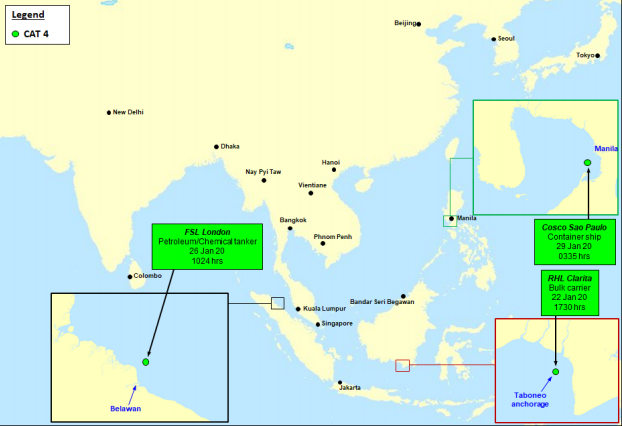