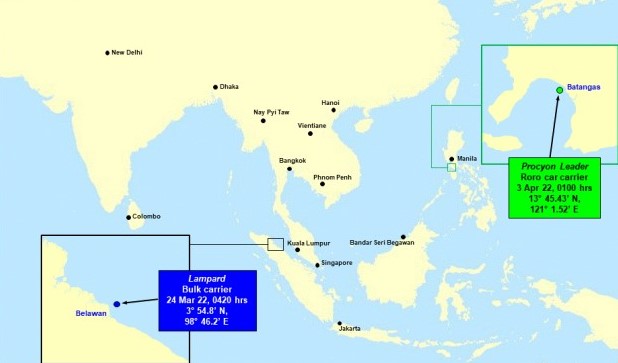 During 29 March – 4 April 22, two incidents (one CAT 31 incident and one CAT 42 incident) of armed robbery against ships in Asia were reported to the ReCAAP ISC.

The CAT 3 incident occurred on 24 Mar to a bulk carrier while anchored at Belawan Anchorage, Indonesia. Three perpetrators armed with long knives and a steel bar were sighted at the forecastle.

The duty crew reported the incident to the bridge. The duty officer raised the ship’s alarm and made an announcement through the PA system.

The master mustered all crew at the bridge and instructed the duty crew to retreat to the accommodation block. The perpetrators stolen some ship strores from the forecastle store. The crew was not injured.

The CAT 4 incident occurred to a RORO car carrier while anchored in the vicinity waters off Delta Anchorage Batangas City, the Philippines. While at anchor, the duty officer sighted five perpetrators on board the ship. The ship’s alarm was immediately raised and the perpetrators escaped in a small unlit boat.

The crew conducted a search on board the ship, and discovered that one fire hydrant cap was missing. The crew also found some stolen items left behind by the perpetrators at the forward station. The crew was not injured.

The ReCAAP ISC urges ship master and crew to report all incidents of piracy and armed robbery against ships to the nearest coastal State and flag State, exercise vigilance and adopt relevant preventive measures taking reference from the Regional Guide to Counter Piracy and Armed Robbery Against Ships in Asia