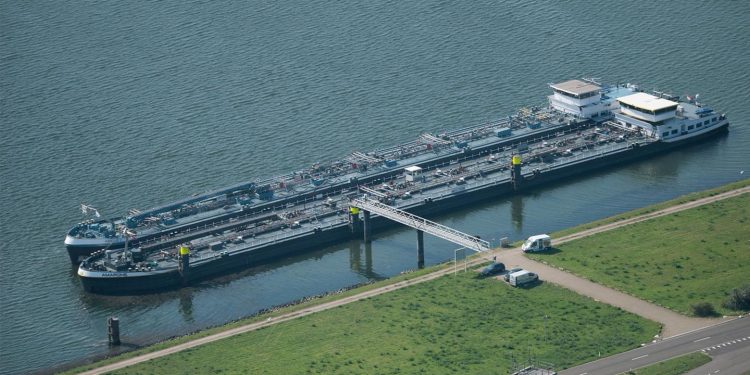 From the second week of January, inland vessels carrying hazardous cargo will be allowed to berth at about 50 mixed berths in the Port of Rotterdam. This will allow so-called cone ships to berth right next to each other and next to vessels without hazardous cargoes.

Both the Harbour Master of Rotterdam and the inland shipping industry have found the pilot to be very positive. As there is a great need for more berth capacity in the port area, the Harbour Master is going to allow mixed berthing at some 50 berths.

The Port Authority now anticipates the amendment of the Inland Waterways Police Regulations (BPR) the ministry is currently working on.

This amendment to the BPR more clearly describes the already existing authority to deviate from the safety distances between vessels carrying either 1 or 2 cones and between vessels that do not carry hazardous cargo.

In doing so, the ministry is drawing on the successful experience already gained in Rotterdam with mixed berthing. The amendment to the BPR is expected to come into force during 2023-2024.

Mixed berthing is in line with the Port of Rotterdam Authority’s policy of using the existing space in the port as efficiently as possible and creating more berths for inland shipping.

The berths in the Rotterdam port area where mixed berthing will soon be allowed have been determined in consultation with the inland shipping industry and the Safety Region, among others.

What is more, to ensure safety, not all inland vessels are allowed to use mixed berths, while certain activities are also prohibited. These activities include smoking and activities involving open flames, work that could cause sparking or bunkering LNG or methanol.

A reporting requirement may also be imposed in certain cases, such as reporting the hazardous cargo in IVS-next.