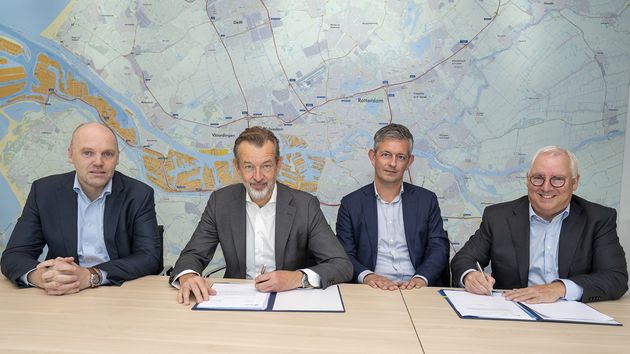 After conducting a European tender procedure, the Port of Rotterdam Authority has awarded the contract for the construction of a new pipeline strip along the Moezelweg to Swietelsky Rail Benelux B.V. The pipeline strip will accommodate pipes belonging to HyTransPort.RTM and Porthos for the movement of hydrogen and CO2.

Expanding the capacity along Moezelweg in the Europoort area will require the relocation of the existing trunk line, the installation of an earth-retaining structure and the excavation of a section of embankment.

The new pipeline strip will be 7.60 metres wide, creating space for six or seven cables and pipes. The project is scheduled for completion at the end of 2023.

The HyTransPort.RTM hydrogen pipeline is an open access pipeline for any company wishing to consume or supply hydrogen. Shell has become the first company to sign up to use HyTransPort.RTM. Holland Hydrogen I, the electrolyser that Shell is going to build on the Maasvlakte, will be connected to the pipeline.

Porthos, a joint venture between the Port of Rotterdam Authority, Gasunie and EBN is developing a project in which CO2 from industry in the port of Rotterdam will be captured, transported and stored in empty gas fields deep beneath the North Sea. Porthos will store about 37 Mtonnes of CO2, which is about 2.5 Mtonnes of CO2 per year for 15 years.

The Port of Rotterdam Authority is aiming for a 55% reduction in carbon emissions in the port industrial complex by 2030, and for the port to achieve climate neutrality by 2050. The ongoing projects that form the energy transition pillars will combine with hydrogen and biofuel production to reduce carbon emissions by 23 million tonnes.