In its weekly report for 15-21 December, ReCAAP ISC informed of one armed robbery against ship in Asia. The incident occurred on 15 December, onboard a bulk carrier Vantage Rider, while berthed at Lubuk Guang Port, Dumai, Indonesia.

The ReCAAP ISC classifies the incidents as CAT 2, which means moderately significant. Under this category, the perpetrators are likely to be armed with knives/machetes and in some incidents armed with guns. The crew is threatened or held hostage temporarily and, in some cases, the crew suffered injury and physical violence.

During his routine rounds, the duty officer onboard the Vantage Rider was taken hostage and tied up by four perpetrators who were armed with knives.

The perpetrators stole ship stores and spare parts, but released the duty officer before they escaped. 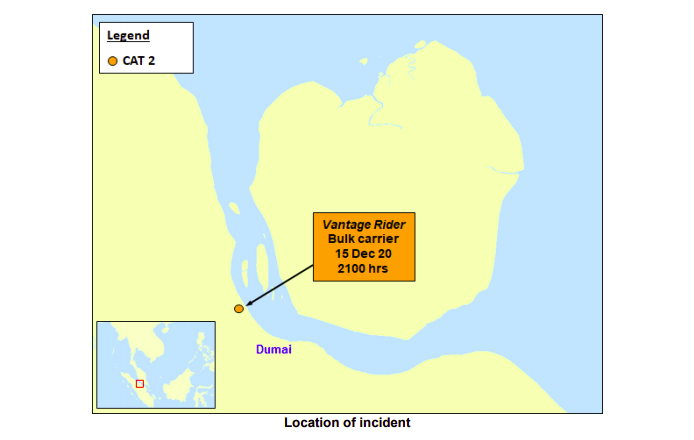 While underway approximately 120 nm south of Onne, Nigeria, the container ship was boarded by an unknown number of perpetrators. The crew proceeded to the citadel.

The master contacted the company office/CSO via satellite phone. The CSO contacted the Marine Domain Awareness for Trade – Gulf of Guinea (MDAT-GOG), as well as the local security service provider and requested for naval assets in the vicinity to render assistance.

The local security service provider under the control of the Nigerian Navy responded by deploying a patrol craft, Defender VI and two utility vessels, Owho and Sirius, to the location of the container ship. The three ships arrived at the location at about 0150 hours (UTC) on 20 Dec.

The Navy personnel from the Nigerian Navy ships boarded the container ship and did a sweep of the ship to ascertain that there were no perpetrators on board.

After given the all clear, the crew came out from the citadel. All 21 crew were safe. The crew did a check on board the ship to determine if anything was stolen or damage.

The ship resumed voyage to Kribi, Cameroon under escort by one of the Nigerian Navy ships.