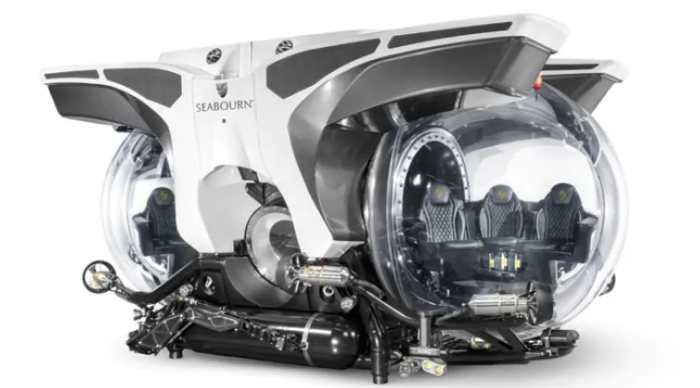 Seabourn is preparing to take travelers into the depths of the ocean for the first time by presenting the design and details for its custom submarines that will operate excursions for an additional charge from the line's two upcoming ultra-luxury purpose-built expedition ships.

Each battery-powered sub will carry up to six guests, along with one pilot, who will guide the journey up to 300 meters beneath the surface to explore sunken wrecks, reefs, and view marine wildlife in their natural habitat.

The subs will be equipped with equipment to enhance this opportunity, as a 4k underwater video camera system will record the world outside while an internal video recording system will capture imagery of guests inside and their direct surroundings.

In addition, a six-function manipulator arm able of lifting up to 32 kg will also be fitted on the side of the sub.

The subs will be operated several times per day in regions around the world where conditions are suitable. They will be equipped with underwater LED flood/spot lights, imaging sonar that acts as a second set of eyes, and an underwater tracking and navigation system.

Seabourn Venture is planned to launch in June 2021, while a second sister ship will launch in May 2022.

Between July 2021 and April 2022, Seabourn Venture will visit a number of locations and remote destinations in the Arctic and Antarctica, as well as in the Amazon, Caribbean, Central and South America and more.

Both ships will be designed and built for diverse environments to PC6 Polar Class standards and will include modern hardware and technology that will extend the ships global deployment and capabilities.