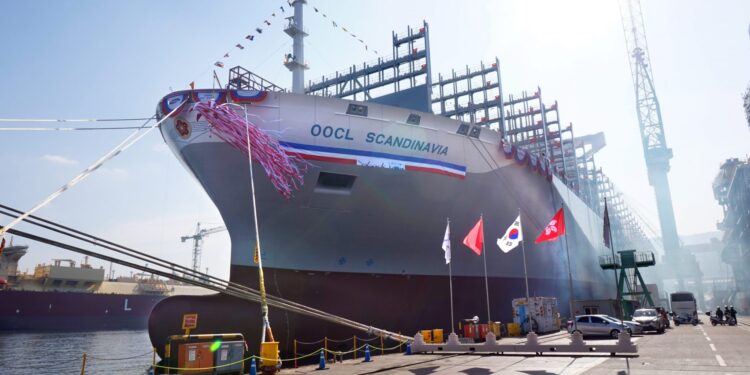 Hong Kong-based OOCL announced introduction of another 21,413 TEU containership, named the OOCL Scandinavia, into its fleet of world trade ambassadors. This latest ship is the fifth in a series of six ‘G Class’ containerships on order at the Samsung Heavy Industry (SHI) shipyard.

The OOCL Scandinavia will be joining her sister vessels, the OOCL Hong Kong, OOCL Germany, OOCL Japan and OOCL United Kingdom in serving the Asia-Europe trade lane on the LL1 service, which links major markets in China and Northern Europe and supports One Belt One Road initiative.

“The incredible work that has gone into the construction of this massive containership before us is the perfect embodiment of what teamwork means and how business collaboration can achieve wonders,” said Mr. C. C. Tung, Chairman of Orient Overseas (International) Ltd., at the naming ceremony at SHI shipyard. “This achievement is about working to bring people and companies of different professions and nationalities together to reach new heights, innovate, solve complicated engineering problems, and along the way, why not break a world record too!”

Back in May, OOCL set a record with the launch of the first container ship in the world to exceed the 21,000 TEU mark. The 21,413 TEU ‘OOCL Hong-Kong’ also serves the Asia-Europe trade lane on the LL1 service.