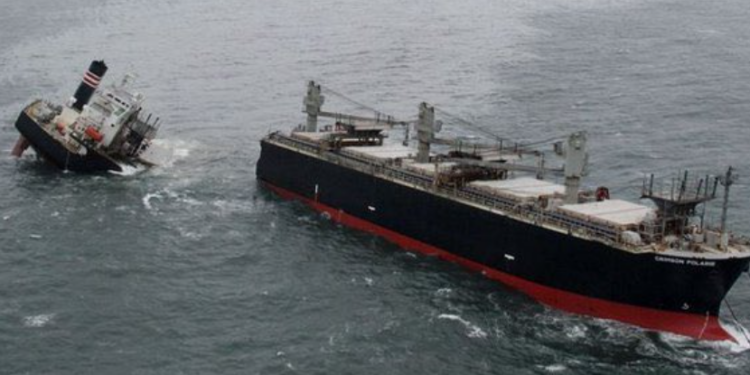 Following the grounding of Crimson Polaris that occurred on August 11 causing an oil spill off Hachinohe, Japanese NYK dispatched 10 employees to assist in the area clean-up.

As the charterer of the vessel, NYK has dispatched company personnel to the site to assist with the clean-up of the cargo and other debris that has washed ashore. The first group of 10 people was dispatched for two days and one night, but the company plans to continue these dispatches of employee groups.

Meanwhile, under the guidance of the Maritime Disaster Prevention Center, the clean-up contractor arranged by the shipowner has continued the clean-up of oil and cargo adrift and on the shoreline.

To remind, the 39,910-tonne Panamanian-flagged vessel “Crimson Polaris” was carrying wood chips from Thailand when it ran aground and split in two off Hachinohe harbour, in the morning of 11 August. Although there were no injuries among the 21 crew, the incident caused an oil spill that reached the Japanese coast.

After the incident, NYK also organized a crisis management center led by NYK president Hitoshi Nagasawa to rapidly address the situation. Company personnel have been sent to the site, and necessary support will be provided to the shipowner and ship-management company.

As a member involved in transportation through the vessel, I am deeply concerned that the accident has caused great inconvenience and concern to the neighboring municipalities, fishermen, business partners, and other related parties. We apologize for the inconvenience,

…NYK said in an official statement.

We will continue to cooperate with ship owners, ship management companies and related parties to make every effort to resolve the situation as soon as possible.