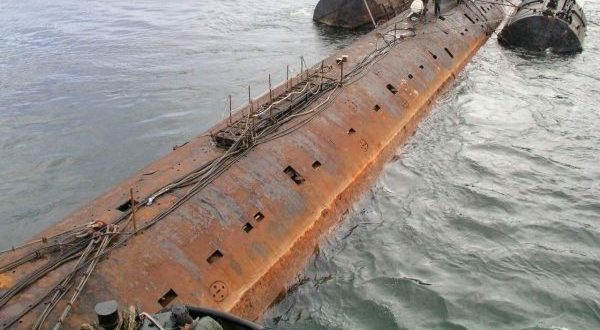 According to a report published by the Norwegian Radiation Protection Authority , the radiation levels near a Russian nuclear submarine that sank in the Barents Sea in 2003 with 800 kilograms of uranium in its reactors, does not pose risks of dangerous levels of radiation, but its situation continues to be monitored.

A joint Norwegian-Russia crew visited the wreck in 2014, to monitor the condition of radioactive waste dumped in northern seas.

The Russian submarine 'K-159', sank  in August of 2003, as it was being towed from the Gremikha submarine maintenance base to be dismantled at the Nerpa shipyard near Murmansk, after the the towing convoy experienced inclement weather.

The new report notes that the submarine is at the bottom of the Barents Sea in an upright position, revealing damage to the submarine’s deck and a break in its hull toward the stern, according to Bellona.

However, after the radiation of the submarine was measured, indications showed that there are no radioactive leaks from the its reactors.

The samples were independently analyzed in Norway, with Russian radiation officials senting the samples to the NRPA, but they were impounded by Russian Customs in Murmansk, where they still remain.

According to NRPA officials they trust their Russian counterparts, concluding that there is no urgent reason to raise the submarine.

However, attempts are being made for the raise of submarines, including the 'K-159', but because of lack of funding, these attempts did not result in anything, Bellona concluded.