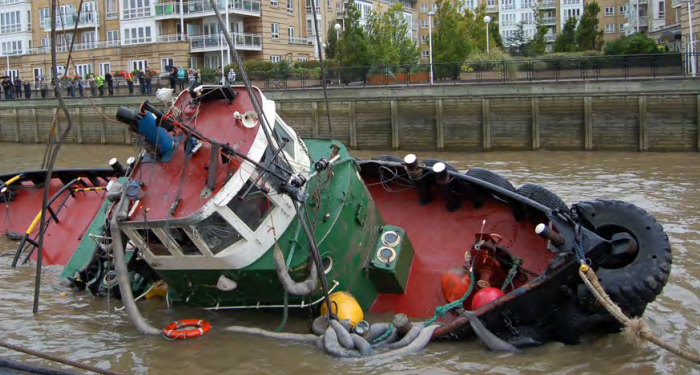 The Port of London Authority and a tugboat captain are facing criminal charges seven years after the tugboat capsized in the river Thames and the engineer drowned due to lack of safety measures.

On August 12, 2011, the engineer of the tug Chiefton drowned when it capsized and sank after colliding with the crane barge it was towing in Greenwich, south London.

According to MAIB report on 2015, two of his colleagues were rescued and the body of the engineer and deckhand was found three days later. The unfortunate engineer/deckhand was a non-swimmer and was not wearing a lifejacket according to MAIB’s investigation.

According to local reports, the owner of the tugboat faces two health and safety charges and the Chiefton’s master is accused of misconduct amounting to a “breach or neglect of duty”.

Furthermore, the owner of the crane barge is accused that the company failed to ensure the safety of the vessel’s operation.

The Chiefton tug, which had been pulling the crane while Steven B’ tug pushed at the rear, capsized after unsuccessfully trying to dodge a buoy and then colliding with the much larger crane.