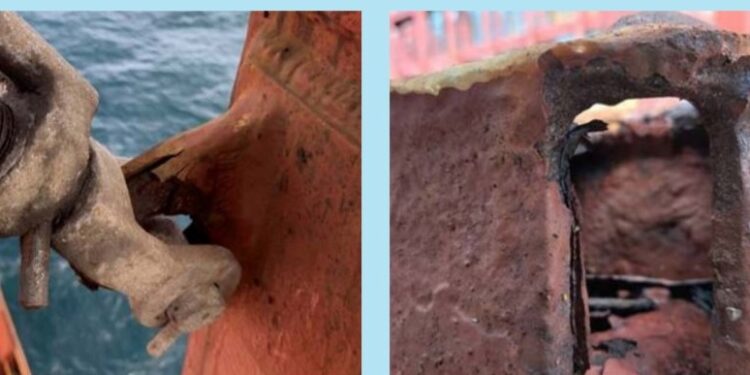 In its most recent “Good Catch” series, the American Club provides lessons learned from an incident that involved corrosion of the twist lock foundations and pad eyes.

A general cargo vessel had been modified to carry containers on the cargo hatches. Various twist lock foundations and pad eyes had been welded to the hatch covers to secure containers.

While the vessel was in port preparing to offload and load containers, the newly arrived Chief Officer noticed that many of the twist lock foundations and pad eyes were significantly corroded. He raised his concern with the Master. They jointly inspected them and found them likely be unsafe due to the excessive corrosion.

The Master called the vessel management company who made arrangements to offload the remaining containers, find a lay berth and make repairs. The vessel spent 2 days at the lay berth and then resumed its schedule without incident.

The incident was written up as a near miss by the Chief Officer who correctly felt that several of the fittings and pad eyes were on the verge of failing and containers could have subsequently been lost or seriously damaged.

Had the repairs not been made and the vessel experienced the heavy weather that had been predicted on their intended route, it is possible that several containers would have been lost overboard or damaged. Costs for the containers could have exceeded $50,000 per container not including any damage to the vessel from unsecured containers.