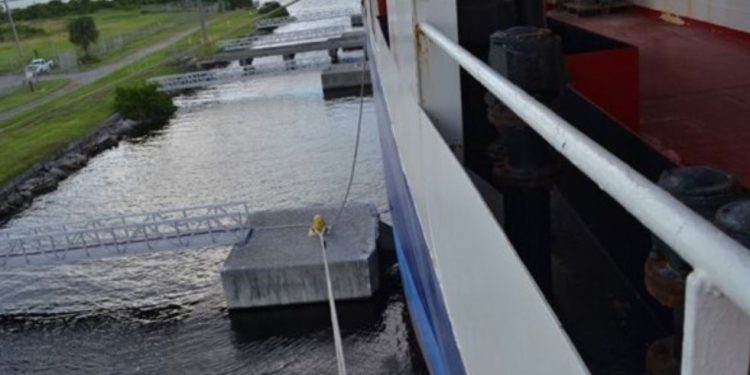 In its recent Good Catch series the American Club informs about a mooring line slack accident and provides lessons learned.

A general cargo vessel was moored at a facility to offload its cargo with its port side to the dock. The vessel was using its standard mooring line configuration with bow and stern lines, a forward and an aft spring line and 2 brest lines.

Anticipating that the vessel’s draft would be decreasing as the cargo was being offloaded, the Chief Officer had instructed that some slack be left in the mooring lines. He did not specify how much slack and did not check the mooring lines himself. The weather was mild with winds blowing at approximately 1-2 knots and there was no appreciable current at that dock.

Shortly after offloading began, a tank vessel passed by. The wake from the tank vessel caused the general cargo vessel to move pushing it into the dock then pulling it away from the dock while also sliding it forward. The movement was substantial due to the slack in the mooring lines.

The American Club notes that the mass of the vessel and the movement forward damaged the fendering system and created a series of scrapes along the vessel’s hull. The mooring lines were not damaged nor were the bollards on the dock. However, several of the large rubber fenders were torn from their mounts.

According to the investigation it was determined that

The investigation also concluded that the tank vessel passed by at a reasonable speed and a reasonable distance from the general cargo vessel.

The American Club highlights that this incident could have been substantially worse. Had someone been standing or walking on the gangway at the time of the incident, they could have been seriously hurt. Although the mooring lines held as designed and intended, had one or more mooring lines parted, the vessel’s movement could have easily caused hull damage significantly more extensive than the paint scrapes experienced.

In order to prevent and avoid such incidents, the following points should be taken into consideration: