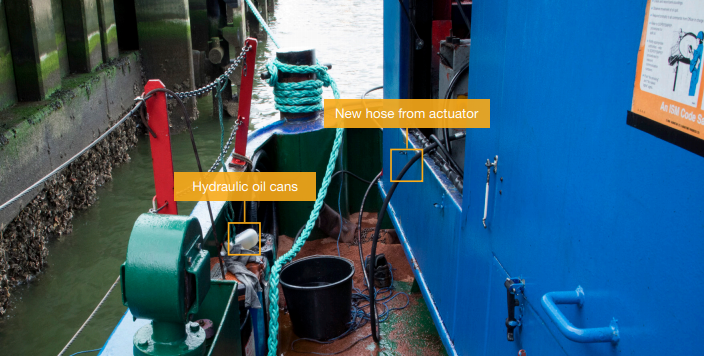 The Danish Maritime Accident Investigation Board (DMAIB) issued an investigation report on the fatality of a first mate onboard the dredger 'KARIN HØJ' while replacing a hydraulic hose on the ship’s propulsion system, in May 2019.

On 9 May 2019, a first mate was trapped by a cardan shaft aboard the construction ship KARIN HØJ, while she was in the process of replacing a hydraulic hose on the ship’s propulsion system.

The first mate perished as a result of her injuries. The ship was in Eemshaven, the Netherlands, when the accident occurred.

The accident investigation showed that the first mate entered the engine compartment from the starboard side and was lying under the cardan shaft while working to change the damaged hydraulic hoses that controlled the vertical propeller shaft.

However, she did not dismount the hoses that were damaged, but the hydraulic hose that was connected to the lifting cylinder of the cardan shaft.

When the hydraulic hose was dismantled, the hydraulic pressure fell in the lifting cylinder, and the cardan shaft was lowered over her.

Additionally, when the first mate started the replacement of the damaged hydraulic hoses, she entered the engine compartment through the hatch in the starboard side, where there was most room to work.

The space conditions around the hydraulic valves in the cardan shaft compartment were limited.

The investigations of DMAIB at the scene of the accident showed that there were two access options to the engine compartment to replace the hydraulic hoses.

The hatch on the port side of the starboard engine gave access, but the disadvantage of working from this side was that you could not see what you were working on.

Access via the hatch on the starboard side of the engine compartment allowed someone to get so close to the hydraulic valves and hydraulic hoses that you could see what you were working with.

This meant that you had to go under the cardan shaft to change the hydraulic hoses. One could also climb over the cardan shaft and work from there, but this offered a very uncomfortable working position and would not be the natural choice.

It is unclear why she unscrewed the hydraulic hose for the lifting cylinder. There may be two reasons for this.

At the scene of the accident, the investigators found the wrench used for the work by the first mate.

The investigation showed that it was difficult to get the wrench onto the fittings of the hydraulic hoses, because the space around the valve battery was limited.

It is thus possible that the first mate wanted to loosen the hose that was placed in front of the two hoses to be switched, in order to get better room for changing the hoses.

When the hose was dismantled, the pressure immediately disappeared, and the lifting cylinder could not hold the cardan shaft up, causing it to lower, trapping the first mate.

Onboard KARIN HØJ, it was normal working practice for the first mate and the master to perform maintenance and minor repairs on machine installations, either alone or following instructions from the technical department of the shipping company.

It is the experience of DMAIB that this practice also exists on other ships, where it is common for the first mate to perform tasks other than traditional mate’s tasks, such as route planning, mooring work, anchoring, repairs and checks on the ship’s rescue equipment and safety equipment. It was therefore a natural task for the first mate on KARIN HØJ to replace two hydraulic hoses, which were visibly damaged and which were essential for the ship’s manoeuvrability.

Since there were spare hoses, hydraulic oil and tools available, there was nothing to indicate that the task ought to have been carried out later and/or by others.

Since the ship’s crew did not possess mechanical engineering skills, they did not recognize that this repair was associated with special risk conditions; conditions relating to the repair of a high-pressure system at a location where there was a possibility of being trapped.

The shipping company’s procedures for carrying out repairs of this type were characterized as being ”important non-routine operations”, which should be subject to a risk assessment onboard the ship.

No formal risk assessment was carried out before beginning the work, but as the crew did not possess mechanical engineering skills, they could not in reality assess the risk conditions. 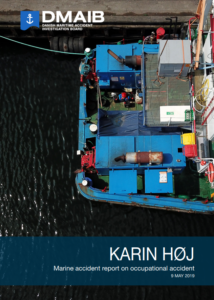