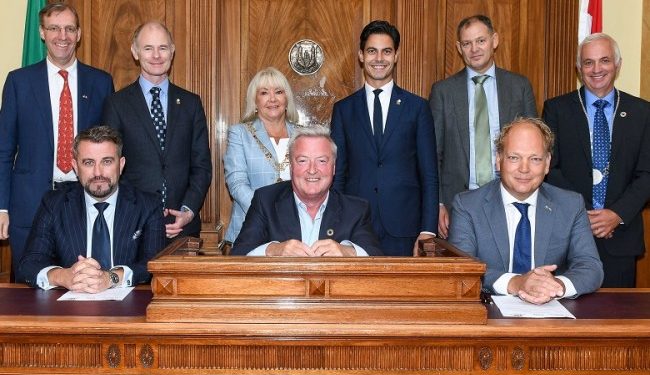 A memorandum of understanding has been signed between Ireland’s first green hydrogen company, EIH2, the Port of Cork and the Port of Amsterdam.

This partnership will enable Ireland to maximise its use of offshore wind as a source of energy, by providing an alternative route to market for such renewable electricity.

Earlier this year, the Irish Government identified an additional 2GW of offshore wind to be used for green hydrogen production and this partnership provides the route to market that is needed for Ireland to become a net exporter of energy over time.

This partnership will help to enable the establishment of a supply chain for green hydrogen between Ireland and Europe via the port of Amsterdam. This agreement reflects the high level of collaboration between Ireland and The Netherlands and the European approach of working together to become the first Net Zero continent.

The signing of the Memorandum of Understanding forms part of a major offshore wind mission organised by the Netherlands Embassy in Ireland from 11th to 14th September and held in Cork.

The purpose of the mission is to increase collaboration on the energy transition between Ireland and The Netherlands at a national level and business to business.

Our goal at EIH2 is to help both Ireland and Europe achieve their ambitious energy targets. The recent RePowerEU plan quadruples the role for Green Hydrogen in Europe. This was reflected in Ireland’s recent carbon budgets, with an additional 2GW of offshore wind planned specifically for green hydrogen production

Moreover, Gert-Jan Nieuwenhuizen, Director Business Development Cargo of Port of Amsterdam, added that “for Port of Amsterdam, priorities are to make green hydrogen available to the large industrial clusters in the greater Amsterdam area, as well as to serve as a gateway to the European hinterland, including regions with high potential demand in Germany.”