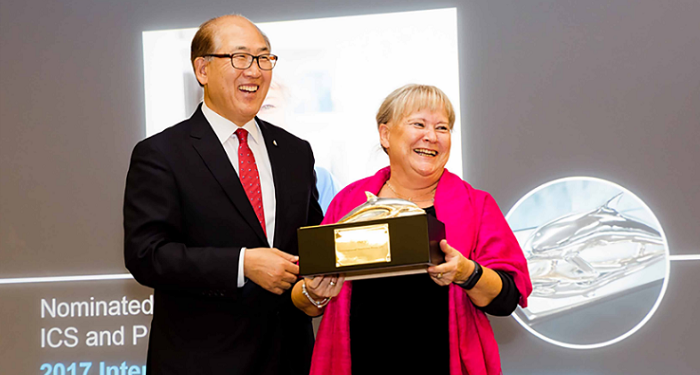 Mrs. Olsen has had a distinguished career in the maritime field and made an outstanding contribution to the objectives of IMO. Her comprehensive knowledge of maritime law is combined with a deep understanding of the business aspects and growth potential of the maritime industry.

In 1996 a delegate could only be reached by fax or by a message left at the IMO switch board. Today delegates are multitasking responding to a number of e-mails, while attending the meetings.  The IMO spirit of cooperation is still the same, but the adoption process is much faster. This gives IMO a better chance to respond to the need of its constituents.

Mrs. Olsen said as she accepted the Prize with gratitude.

Denmark highlighted Mrs. Sølling Olsen’s focus on international solutions as a member of the Danish delegation during deliberations at IMO, during negotiations related to the International Oil Pollution Compensation (IOPC) Funds, the development of international guidelines to combat piracy, and the development and adoption of the Nairobi Wreck Removal Convention, 2007. Mrs. Sølling Olsen also worked tirelessly to ensure seafarer issues were addressed, both at IMO and at the International Labour Organization, including seafarer training and education, working conditions and personal safety.