How Russia’s invasion of Ukraine impacts the port of Rotterdam 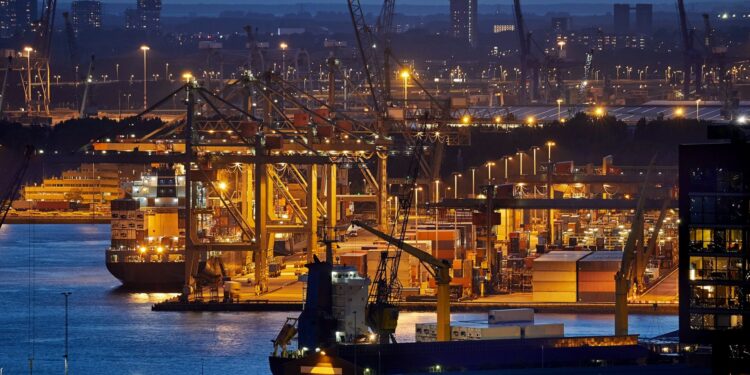 The war in Ukraine has prompted the European Union and other bodies to impose a number of sanctions on Russia. The extensive import of energy (crude oil, oil products, LNG, coal) is not (yet) affected by sanctions, but the export and transhipment of containers in particular suffers from the uncertainty caused by the war and the sanctions, mentions the Port of Rotterdam authority.

Of the roughly 470 million tons transshipped through the port of Rotterdam, 62 million tons are oriented towards Russia (13%). Large amounts of energy carriers are imported from Russia via the port of Rotterdam. This comes to roughly 30% of Russian crude oil, 25% of LNG and coal, and 20% of oil products. Russia exports products such as steel, copper, aluminium and nickel via Rotterdam.

As of 17 April, the package of new sanctions includes a prohibition on access to ports in the territory of the European Union for vessels registered under the flag of Russia.

This package includes a ban on:

The sanctions package contains exceptions for certain types of cargo. Vessels sailing under the flag of Russia but falling within the exceptions may therefore still be allowed access to port. The exceptions relate to cargo such as oil and gas, refined petroleum products and a number of ores, pharmaceutical and medical products, agricultural and food products, and products for civil nuclear applications, as well as extending to vessels where humanitarian grounds apply.

A Russian vessel’s master, agent, owner and cargo owner must ascertain whether the vessel falls within exceptions under which it can be allowed access. However, the Harbour Master will remain responsible for implementing the port access policy. Separately from this sanctions package, the European Union published a list of natural persons and entities against which restrictive measures have been imposed in the fourth sanctions package. That list also includes a number of vessels, to which certain exceptions apply.

Barely 10% of Rotterdam’s container transport is linked to Russia. The European Union has prohibited the export of a number of goods that can be used for both civilian and military purposes (dual use). That means container cargo with Russia as its destination will receive extra Customs inspections.

The Rotterdam Port Authority has not independently drafted any policies of its own in response to the war in Ukraine. Nor does the Port Authority have the authority to do something like impose restrictions on businesses. This is the responsibility of the Dutch government. The Port Authority supports the policies of the Dutch and European authorities. International rule of law and the right to self-determination of countries are essential values and therefore not open to question.

the Autority concludes, informing that it will provide further updates with regards to sanctions, if there is any change, in due course.