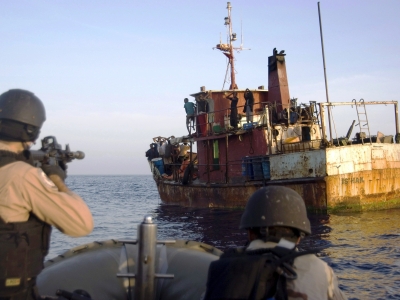 The global shipping industry (represented by the Round Table of international shipping associations) has called for the establishment of a United Nations force of armed military guards to tackle the piracy crisis in the Indian Ocean, which it says is spiralling out of control.

In a hard hitting letter to UN Secretary-General Ban Ki-Moon, the International Chamber of Shipping (ICS), BIMCO, INTERTANKO and INTERCARGO demand a "bold new strategy" to curb rising levels of piracy which have resulted in the Indian Ocean resembling "the wild west".

The letter states: "It is now abundantly clear to shipping companies that the current situation, whereby control of the Indian Ocean has been ceded to pirates, requires a bold new strategy. To be candid, the current approach is not working."

Regretting the increasing necessity for shipping companies to employ private armed guards to protect crew and ships, the letter continues: "It seems inevitable that lawlessness ashore in Somalia will continue to breed lawlessness at sea."

The shipping industry organisations - which represent more than 90% of the world merchant fleet - say they fully support the UN's long-term measures on shore aimed at helping the Somali people but are concerned that these "may take years, if not decades, to have a meaningful impact on piracy."

Asking the UN to bring the concept of a UN force of armed military guards to the attention of its Security Council, the letter says: "The shipping industry believes that the situation can only be reversed with a bold approach that targets the problem in manageable pieces. We believe that an important element in this approach would be the establishment of a UN Force of Armed Military Guards that can be deployed in small numbers onboard merchant ships. This would be an innovative force in terms of UN peacekeeping activity but it would do much to stabilise the situation, to restrict the growth of unregulated, privately contracted armed security personnel and to allow those UN Member States lacking maritime forces - including those in the region most immediately affected - to make a meaningful contribution in the area of counter-piracy."

You can view the Letter to Ban Ki-Moon by clicking here.