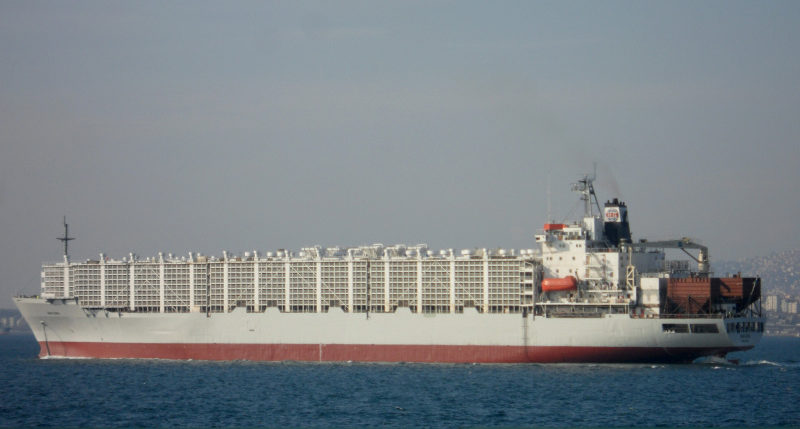 Above image is used for illustration purposes only/ Credit: Shipspotting

Cows die from hot conditions on livestock carrier at Israel

Israeli media reported that dozens of calves died onboard a livestock transport ship which arrived in Israel, rising charges of animal cruelty from rights advocates. The ship was carrying 20,000 calves and lambs, and had arrived in Eilat on June 8.

Workers on the ship started removing the animals from the ship, with the operations lasting five days. Therefore, the animals were left in hot, crowded conditions. Namely, the Agricultural Ministry informed that 34 of the calves died onboard, while 30 more died after disembarking.

What is more, footage posted last week by the Israel Against Live Shipments, shows animals lying on the floor dead.

The problems of livestock shipments has received new attention, as earlier in June, two cow carcasses washed up on the Tel Aviv shoreline, in separate incidents.

Today, local media inform that about 50,000 live calves were shipped to Israel for fattening and slaughter only in January. For this reason, in 2017, the Knesset approved a bill aiming to stop the live transports of lambs and calves from Australia and Europe to Israel.

The bill aspires to gradually decrease livestock numbers that are imported in Israel and stop them altogether in a span of three years.

In addition, the regulation notes that animals on livestock transports are experiencing overcrowding, they become drenched in feces, while they also suffer from heat overload severe injuries.