David Jacoby, senior security researcher at Kaspersky, reported that data hacking is a major threat and this applies at both an individual and societal level. In light of cyber attacks, some companies have taken novel steps to try to thwart credential stuffing attacks against their users by obtaining the breached data themselves and cross referencing it against their own database.

Another important step is to inform users how to react after being attacked. For instance, US Coast Guard published a Bulletin concerning a cyber incident that occurred on a commercial vessel. The paper aimed to inform possible victims how to prevent cyber attacks and also provides additional information on who to inform if one is under attack.

Additionally, the cost on average of identifying and stopping a data breach is $2.1 million (Dh7.7m), compared to $3.5m in the Gulf Cooperation Council region.

Because up to 300 cyber attacks were reported in 2017 in the GCC region, at least half a dozen resulting in data breaches, Gard Club in collaboration with DNV GL explained what are the possible cyber threats and how we can mitigate them or prevent them.

Concerning cyber attacks Mr Blatteis, who is the former head of Gulf government relations and public policy at Google, commented

Recent data breach attacks prove there needs to be a long overdue, understated wider conversation with platforms and governments about privacy and security in our region.

The average cost of data breaches in the Arabian Gulf region’s two biggest economies – the UAE and Saudi Arabia – was $5.31m in 2018, a 7.1% year-on-year increase.

Concerning UAE, a cyber attack that hit Saipem’s servers in Middle East had many effects on the serves' operation in Saudi Arabia, the United Arab Emirates and Kuwait.

The UAE’s digital footprint continues to be an attractive target for cyber attacks.

According to IBM’s report, organisations in Saudi Arabia and the UAE are most likely to experience a malicious or criminal attack globally, reaching the 61%.

Cyber experts say it is also important to be alert of any phishing attempt where criminals try to extract confidential details such as usernames, passwords and bank information by masquerading as a legal entity in an electronic exchange of communication.

Companies and individuals should also familiarise themselves with policies from retailers and online services that may request their banking or personal information and ensure they understand how to use sensitive data.

In addition, according to the report, the mean time to identify (MTTI) data breach globally was 197 days in 2018, while the mean time to contain (MTTC) was 69 days. Companies that identified a breach in less than 100 days saved more than $1m as compared to those that took more than that.

Days to identify and contain the data breach over 2018

Concluding, more than 50% of global consumers expressed anxiety about identity theft, including hacking of financial, medical or other personal information.

For more information on the report, click the PDF herebelow 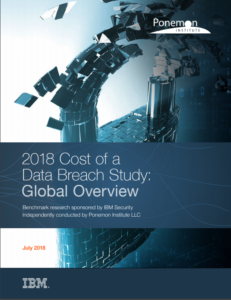