UN Chief ‘disappointed’ as COP 25 ends with a modest deal

The UN Climate Summit (COP 25) in Madrid ended on Sunday after two weeks of intense negotiations, with the UN Secretary General expressing disappointment for the overall result, despite some progress made by the private sector and regional governments. The most notable outcome was a modest agreement highlighting the ''urgent need'' to bridge the gap between greenhouse gas targets set in Paris Agreement and scientific advice that says much deeper cuts are needed.

The COP 25 took place in Madrid, Spain, from 2 to 15 December, gathering NGOs, experts and government officials in the global debate of the next crucial steps in the UN climate change process. The key objective was to finalize the rule book for the full operationalization of the Paris Agreement, which aims to limit global temperature rises to well below 2 degrees Celsius.

However, few countries came up with any carbon targets, and talks were characterized by squabbling over technical details, such as the workings of the global carbon markets, by which countries can buy and sell carbon credits based on their emissions-cutting efforts.

I am disappointed with the results of COP 25. The international community lost an important opportunity to show increased ambition on mitigation, adaptation & finance to tackle the climate crisis. But we must not give up, and I will not give up,

The meeting was to conclude on Friday, but negotiations went overtime as no tangible result was reached. On Saturday evening, there was still no sign of progress, prompting acclaimed 16-year-old activist Greta Thunberg, to state:

“It seems like COP25 in Madrid is falling apart right now. The science is clear, but the science is being ignored”.

While most details were carried over to be discussed again next year, there was a well-noted recognition that tougher carbon targets are needed globally, focusing not only on the already established long-term targets, but also on a short-term climate plan for the next 10 years.

On the bright side, there were some announcements during the two-week event that indicated some progress: 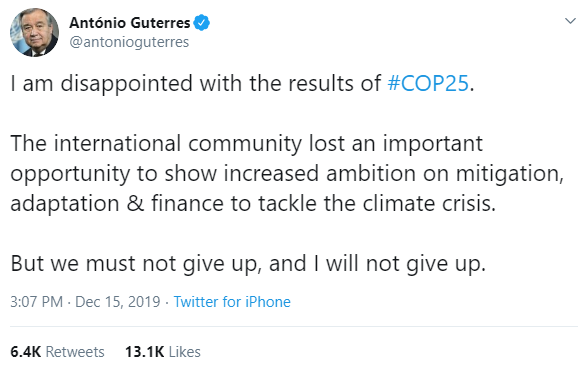 The final draft did acknowledge the “significant gap” between existing pledges and the temperature goals adopted in 2015, but this was still seen as a weak response to the sense of urgency brought by the adverse effects of climate change, such as floods and cyclones. Delegates namely endorsed a declaration to help poor countries suffering the effects of climate change, but did not allocate any new funds to do so

Delegates also said the negotiations became mired in disputes over the rules that should govern international carbon trading, favored by wealthier countries to reduce the cost of cutting emissions. Brazil, Australia, the US, China and other major emitters were all accused of holding up progress.

Countries also failed to establish market rules for trading carbon credits, considered one of the most contentious issues at the conference.

After final decisions were made, Chile’s environment minister Carolina Schmidt - who served as president of the talks - said she was “of mixed emotions”.

The next climate summit (COP26) will take place in Glasgow, Scotland, in December 2020, where countries will be expected to present upgraded national climate plans, that go beyond commitments made under the 2015 Paris Agreement.

While results this year were rather than satisfactory in terms of targets declared, Mr. Guiterres stressed his strong determination for “2020 to be the year in which all countries commit to do what science tells us is necessary to reach carbon neutrality in 2050 and a no more than 1.5 degree temperature rise.”