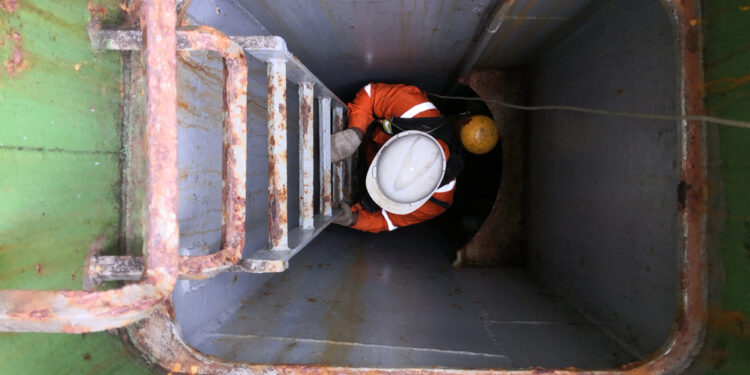 Image hereabove is used for illustration purposes only / Credit: Shutterstock

A Chief Officer onboard a Hong Kong-registered chemical/product carrier rashly entered a cargo oil tank for rescue, but fainted instantly and fell onto the second landing platform in the tank, resulting in his death. Hong Kong MARDEP shared lessons learned from the incident.

When a Hong Kong-registered chemical/product carrier was en route along the coast to the port in Durban, South Africa for loading, the Chief Officer (C/O) instructed an ordinary seaman (OS) to enter a cargo oil tank with the assistance of two cadets for final tank inspection.

The Third Officer (3/O), who wore a set of self-contained breathing apparatus (SCBA), went inside the tank attempting to rescue the two crew members. However, he also fainted on the first landing platform when he took off the face mask of the SCBA to communicate with the persons outside the tank. The OS and 3/O were rescued from the tank later. However, the C/O was declared dead afterwards.

The investigation revealed the main contributory factors of the accident were non-compliance with the permit-to-work system for enclosed space entry and the absence of risk assessment for tank entry.

The lack of supervision of the rescue operation according to the standing procedures had resulted in the death of the C/O.

The investigation also identified that the cargo oil tank tagging mechanism was not strictly followed and the crew was not trained sufficiently for the rescue.

In order to avoid recurrence of similar accidents in the future, masters, officers and crew of vessels should: