Blue Marlin, Boskali's heavy transport vessel was hijacked on Sunday, May 5, about 80 nautical miles offshore Equatorial Guinea. In a statement, the company announced that the vessel's crew was freed due to professional response of the crew and a coordinated support from the navy of Equatorial Guinea and Spain, the violent hijacking has been ended and the crew was safely freed.

The company said that the vessel after unloading its cargo in Equatorial Guinea, departed, destined to Malta.

Sunday afternoon, the ship was unlawfully boarded from a zodiac by several armed pirates. By acting quickly and professionally, all twenty crew members were able to secure themselves in the citadel. 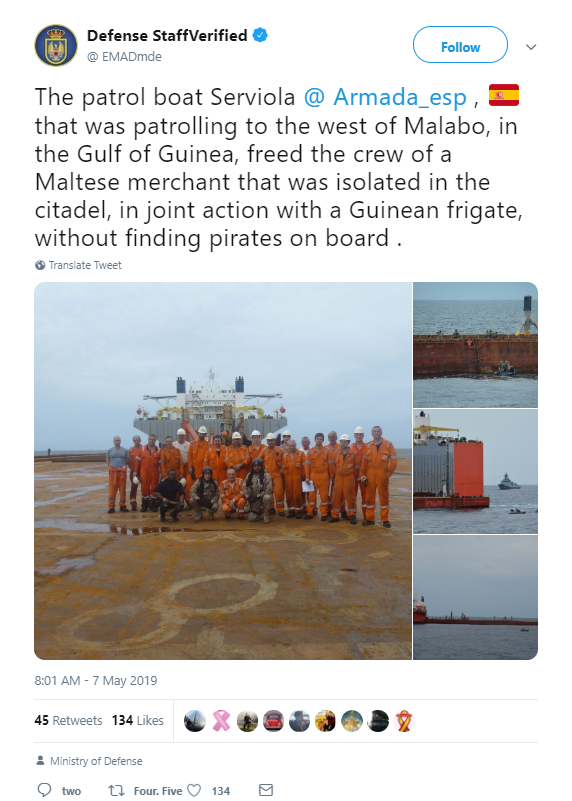 When the authorities arrived, Monday May 6, they boarded the Blue Marin and thoroughly searched it. There were no pirates found and the crew was later freed from the citadel.

The crewmembers remain healthy. Yet, the pirates shot several times during their time aboard the Blue Marlin and caused substantial material damage on the bridge, preventing the ship from being sailable. The vessel is currently approximately 40 miles offshore Equatorial Guinea, in international waters.

After freeing the vessel, the Spanish naval left on Monday afternoon, whereas the naval vessel of Equatorial Guinea departed from the area the same day, during night hours.

The latter left five armed guards on board in protection of the vessel.

Boskalis has now mobilized a oceangoing tug to take the Blue Marlin to a safe location.